Wisconsin feels the impact from a national decline in refugee resettlement Wisconsin isn’t the biggest destination for refugee resettlement by far, but the multi-year decline in the state accompanies a similarly dramatic nationwide trend — detailed in data from the U.S. State Department’s WRAPSnet system — as the Trump administration increasingly bars the way for displaced and persecuted people hoping to build a new life in the United States.

The United Nations, U.S. State Department and international refugee resettlement non-profit groups each play roles in a system to determine if and where a given individual or family of refugees should be resettled. Over the past two years, the Trump administration’s policies have set in motion a rapid erosion of the infrastructure that serves refugees when they arrive in the U.S.

Non-profit resettlement agencies and their local satellites are responsible for much of the on-the-ground work of helping refugees restart their lives, from securing housing to gathering donated furniture and housewares to helping with job placement. To operate, these agencies rely on federal funding, which is allocated on a per-refugee basis.

When resettlement abruptly slows, these organizations feel the pinch, and at times end up having to close offices or lay off staff. In turn, there are fewer resources and less of a support structure for those refugees who do come to the U.S.

Catholic Charities’ announcement leaves four nonprofits in Wisconsin that handle refugee resettlement work: International Institute of Wisconsin in Milwaukee, Jewish Social Services of Madison, Lutheran Social Services of Wisconsin and Upper Michigan, and World Relief Fox Valley in Appleton. None of those four are currently planning on ending their resettlement program, but each has experienced turbulence since President Donald Trump issued Executive Order 13769 one week after taking office.

The order, which became the subject of protests and court challenges, temporarily halted the resettlement process and cut the targeted number of refugees the U.S. would accept in 2017; another executive order issued in October of that year ended the moratorium.

Jewish Social Services of Madison, a local satellite of HIAS, has had its current refugee resettlement program up and running for only two years. Resettlement coordinator Becca Schwartz said it’s been difficult to put the program on a solid footing over that period. While the local agency is absorbing the effects of diminishing refugee resettlement numbers and associated funding at the national level, it has experienced some busy spells.

“We’ve had an interesting year, mainly because we resettled more people this year than we did last year, which is very, very unusual,” Schwartz said. “We’re the only agency I’ve heard of where that’s happening.”

If arrivals are very slow for a while, but then, say, several families arrive for resettlement in a short period, that crunch can put an organization like Jewish Social Services in a bind. Overall, a steady flow of refugees works better for resettlement agencies.

It might sound like a cold budgeting-oriented approach to apply to a humanitarian mission, but if an organization has a reliable estimate of how frequently it will resettle refugees and what kind of funding it will receive, it’s much better able plan ahead, determine what kind of capacity it’ll have to serve refugees in the future, and where to allocate money and staff.

“This is when we would be hiring someone new and at this point — we don’t feel like this is a responsible thing to do, because we have a need but we don’t know if the work will be there next year or even in a few months,” Schwartz said.

Refugee resettlement — a system distinct from other immigration programs in the U.S., including the asylum process — is necessarily subject to numeric ups and downs over time. At a basic level, it is a response to crisis and upheaval, including relatively recent examples the Syrian civil war and a multi-fronted genocide in Burma. But the dramatic drop-off over the course of 2016 and 2017 reflects the executive branch using its power to determine how many refugees enter the United States.

Another trend is that Wisconsin’s biggest city, Milwaukee, remains its primary destination for refugee resettlement. Because there are more jobs and support resources to be had in bigger cities, those end up hosting larger numbers of resettled refugees. That said, urban and rural communities across Wisconsin have become home to refugees, and the Fox Cities region has also played a visible role in resettlement.

At the international level, refugee resettlement agencies and advocates point to the human cost of limiting options for displaced or persecuted people seeking to escape dangerous circumstances. Even before the Trump administration’s cuts to resettlement goals, the U.N. estimated that only about one percent of the world’s refugees were successfully resettled in new countries in 2016. Displaced people can languish in refugee camps for years and years, enduring an insecure and often dangerous life.

The southeast Asian nation of Burma, also called Myanmar, provides several examples of this issue. For decades, its government has waged civil wars and genocides against several ethnic and religious minorities in different regions.

One such minority, the Karen, hail from the eastern part of the country and have been engaged in a grueling civil war with a series of Burmese governments since the late 1940s. Tens of thousands of Karen people have been displaced during the course of this conflict, and have been fleeing into Thailand since at least the early 1980s. One refugee camp in Thailand has existed since 1984.

On Burma’s western border with Bangladesh, the nation’s Buddhist majority has waged a vicious ethnic-cleansing campaign against a Muslim group called the Rohingya, Hundreds of thousands of displaced Rohingya people have suffered a long-term limbo, because neither country really wants them.

Federal refugee resettlement information, including data about Wisconsin, breaks down admissions by nation of origin, but doesn’t offer further breakdowns by specific ethnicities or regions from within those countries. This limitation makes it difficult to determine just how many of Wisconsin’s Burmese refugees hail from specific groups in that country. However, Rohingya refugees are among those establishing new communities in Milwaukee, and have held protests against the Burmese government.

It is in situations like those in Burma when refugees will appeal to the U.N. for help, kicking off what can be as long as a two-year process (if successful) of vetting, including multiple interviews and, if resettled in the U.S., extensive security screening by multiple federal agencies. Trump and other opponents of refugee resettlement have called for “extreme vetting” practices, and the U.S. has instituted additional screening measures, contributing to the ongoing drop in admissions. 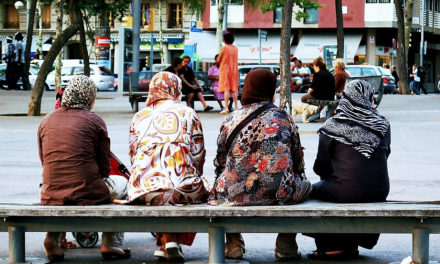