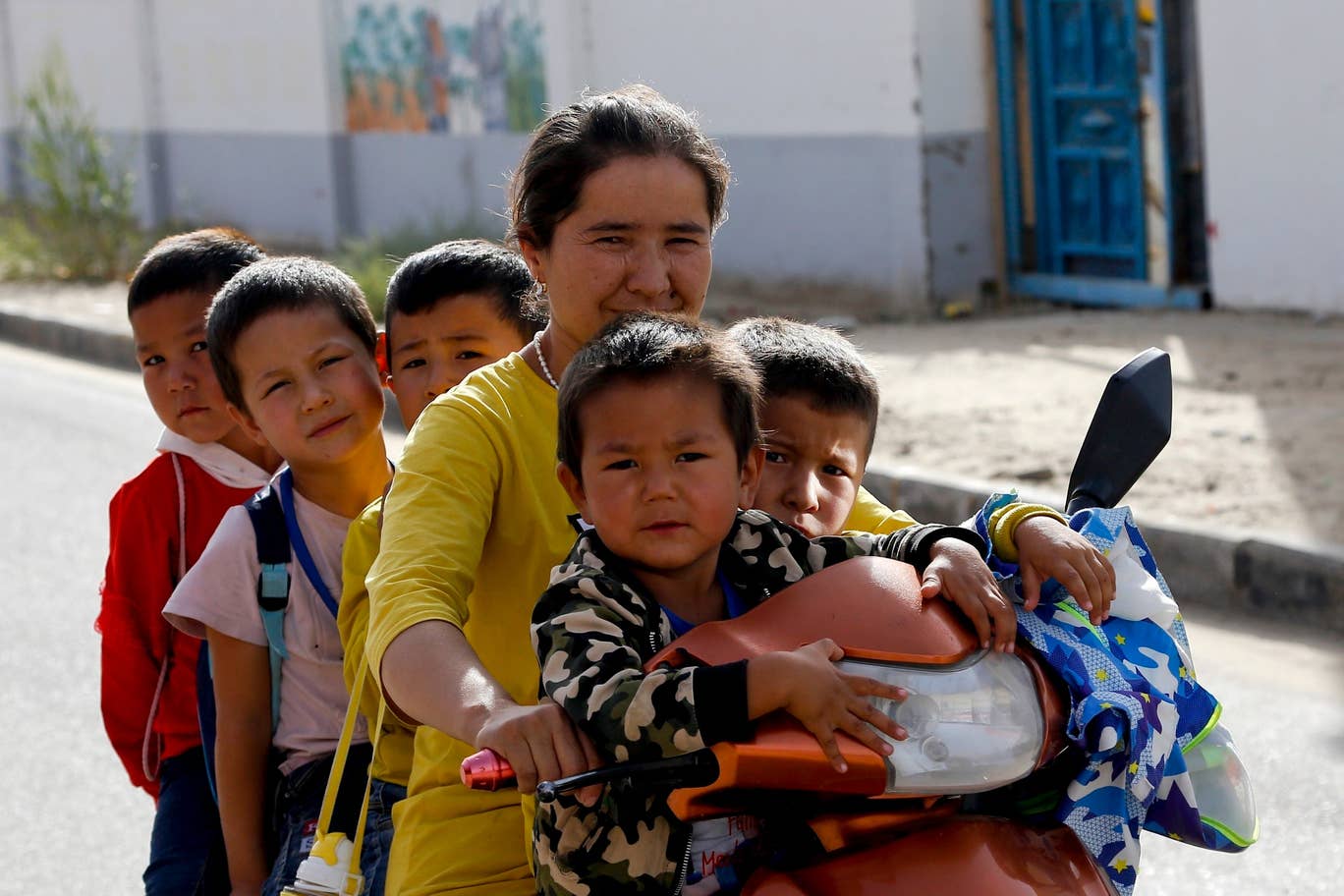 The Chinese government is taking Draconian measures to slash birth rates among Uighurs and other minorities as part of a sweeping campaign to curb its Muslim population, even as it encourages some of the country’s Han majority to have more children.

While individual women have spoken out before about forced birth control, the practice is far more widespread and systematic than previously known, according to an AP investigation based on government statistics, state documents and interviews with 30 ex-detainees, family members and a former detention camp instructor. The campaign over the past four years in the far west region of Xinjiang is leading to what some experts are calling a form of “demographic genocide”.

The state regularly subjects minority women to pregnancy checks, and forces intrauterine devices, sterilisation and even abortion on hundreds of thousands, the interviews and data show. Even while the use of IUDs and sterilisation has fallen nationwide, it is rising sharply in Xinjiang.

The population control measures are backed by mass detention both as a threat and as a punishment for failure to comply. Having too many children is a major reason people are sent to detention camps, the AP found, with the parents of three or more ripped away from their families unless they can pay huge fines. Police raid homes, terrifying parents as they search for hidden children.

After Gulnar Omirzakh, a Chinese-born Kazakh, had her third child, the government ordered her to get an IUD inserted. Two years later, in January 2018, four officials in military camouflage came knocking at her door anyway. They gave Ms Omirzakh, the penniless wife of a detained vegetable trader, three days to pay a $2,685 (£2,171) fine for having more than two children.

If she didn’t, they warned, she would join her husband and a million other ethnic minorities locked up in internment camps – often for having too many children.

“God bequeaths children on you. To prevent people from having children is wrong,” said Ms Omirzakh, who tears up even now thinking back to that day. “They want to destroy us as a people.”

The result of the birth control campaign is a climate of terror around having children, as seen in interview after interview. Birth rates in the mostly Uighur regions of Hotan and Kashgar plunged by more than 60 per cent from 2015 to 2018, the latest year available in government statistics. Across the Xinjiang region, birth rates continue to plummet, falling nearly 24 per cent last year alone — compared to just 4.2 per cent nationwide, statistics show.

The hundreds of millions of dollars the government pours into birth control has transformed Xinjiang from one of China’s fastest-growing regions to among its slowest in just a few years, according to new research obtained by the AP in advance of publication by China scholar Adrian Zenz.

“This kind of drop is unprecedented … there’s a ruthlessness to it,” said Mr Zenz, a leading expert in the policing of China’s minority regions. “This is part of a wider control campaign to subjugate the Uighurs.”

The Chinese Foreign Ministry referred multiple requests for comment to the Xinjiang government, which did not respond. However, Chinese officials have said in the past that the new measures are merely meant to be fair, allowing both Han Chinese and ethnic minorities the same number of children.

For decades, China had one of the most extensive systems of minority entitlements in the world, with Uighurs and others getting more points on college entrance exams, hiring quotas for government posts and laxer birth control restrictions. Under China’s now-abandoned ‘one-child’ policy, the authorities had long encouraged, often forced, contraceptives, sterilisation and abortion on Han Chinese. But minorities were allowed two children — three if they came from the countryside.

Under President Xi Jinping, China’s most authoritarian leader in decades, those benefits are now being rolled back. In 2014, soon after Mr Jinping visited Xinjiang, the region’s top official said it was time to implement “equal family planning policies” for all ethnicities and “reduce and stabilise birth rates.” In the following years, the government declared that instead of just one child, Han Chinese could now have two, and three in Xinjiang’s rural areas, just like minorities. 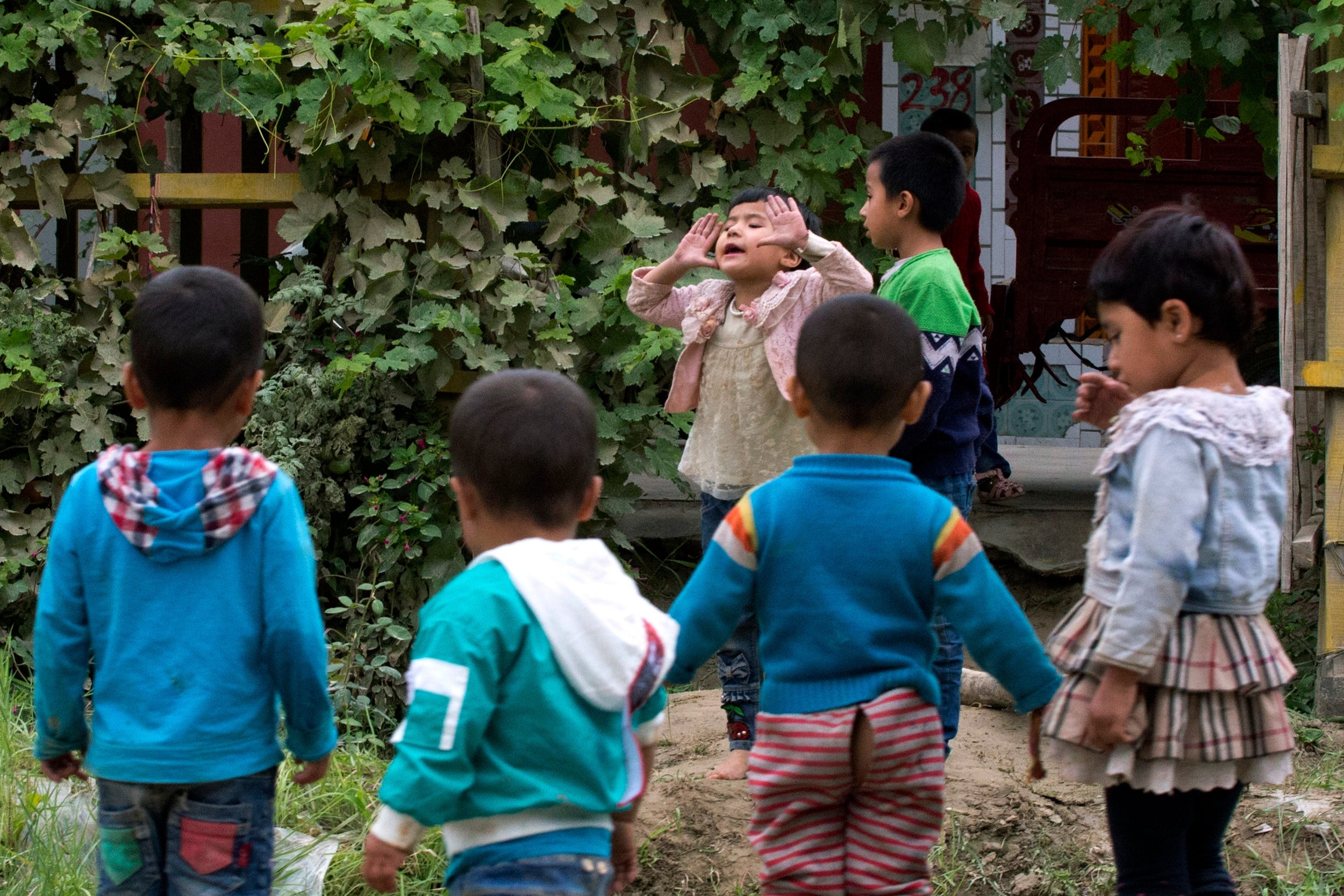 But while equal on paper, in practice Han Chinese are largely spared the abortions, sterilisations, IUD insertions and detentions for having too many children that are forced on Xinjiang’s other ethnicities, interviews and data show. Some rural Muslims, like Omirzakh, are punished even for having the three children allowed by the law.

State-backed scholars have warned for years that large rural religious families were at the root of bombings, knifings and other attacks the Xinjiang government blamed on Islamic terrorists. The growing Muslim population was a breeding ground for poverty and extremism, “heightening political risk,” according to a 2017 paper by the head of the Institute of Sociology at the Xinjiang Academy of Social Sciences. Another cited as a key obstacle the religious belief that “the foetus is a gift from God”.

Outside experts say the birth control campaign is part of a state-orchestrated assault on the Uighurs to purge them of their faith and identity and forcibly assimilate them into the dominant Han Chinese culture. They’re subjected to political and religious re-education in camps and forced labour in factories, while their children are indoctrinated in orphanages. Uighurs, who are often but not always Muslim, are also tracked by a vast digital surveillance apparatus.

“The intention may not be to fully eliminate the Uighur population, but it will sharply diminish their vitality, making them easier to assimilate,” said Darren Byler, an expert on Uighurs at the University of Colorado.

Some go a step further.

The success of China’s push to control births among Muslim minorities shows up in the numbers for IUDs and sterilisation.

A former teacher drafted to work as an instructor at a detention camp described her experience with IUDs to the AP.

It started with flag-raising assemblies at her housing compound at the beginning of 2017, where residents were forced to chant: “If we have too many children, we’re religious extremists. That means we have to go to the training centres.” After every flag-raising ceremony, police rounded up parents with too many children – over 180 – until “not a single one was left,” she said. Officers with guns and tasers hauled her neighbours away at night, and from time to time pounded on her door and swept her apartment for Qurans, knives, prayer mats and of course children.

“Your heart would leap out of your chest,” she said.

Then, that August, officials in the teacher’s compound were told to install IUDs on all women of childbearing age. She protested, saying she was nearly 50 with just one child and no plans to have more. Officials threatened to drag her to a police station and strap her to an iron chair for interrogation.

She was forced into a bus with four armed officers and taken to a hospital where hundreds of Uighur women lined up in silence, waiting for IUDs to be inserted. Some wept quietly, but nobody dared say a word because of the surveillance cameras hanging overhead.

Her IUD was designed to be irremovable without special instruments. The first 15 days, she got headaches and nonstop menstrual bleeding.

“I couldn’t eat properly, I couldn’t sleep properly. It gave me huge psychological pressure,” she said. “Only Uighurs had to wear it.”

Budget documents obtained by Mr Zenz show that starting in 2016, the Xinjiang government began pumping tens of millions of dollars into a birth control surgery programme and cash incentives for women to get sterilised. While sterilisation rates plunged in the rest of the country, they surged seven-fold in Xinjiang from 2016 to 2018, to more than 60,000 procedures. The Uighur-majority city of Hotan budgeted for 14,872 sterilisations in 2019 — about 34 per cent of all married women of childbearing age.

Even within Xinjiang, policies vary widely, being harsher in the heavily Uighur south than the Han-majority north. In Shihezi, a Han-dominated city where Uighurs make up just 2 per cent of the population, the government subsidizes baby formula and hospital birth services to encourage more children, state media reported.

Zumret Dawut got no such benefits. In 2018, the mother of three was locked in a camp for two months for having an American visa.

When she returned home under house arrest, officials forced her to get gynaecology exams every month, along with all other Uighur women in her compound. Han women were exempted. They warned that if she didn’t take what they called “free examinations”, she could end up back in the camp. 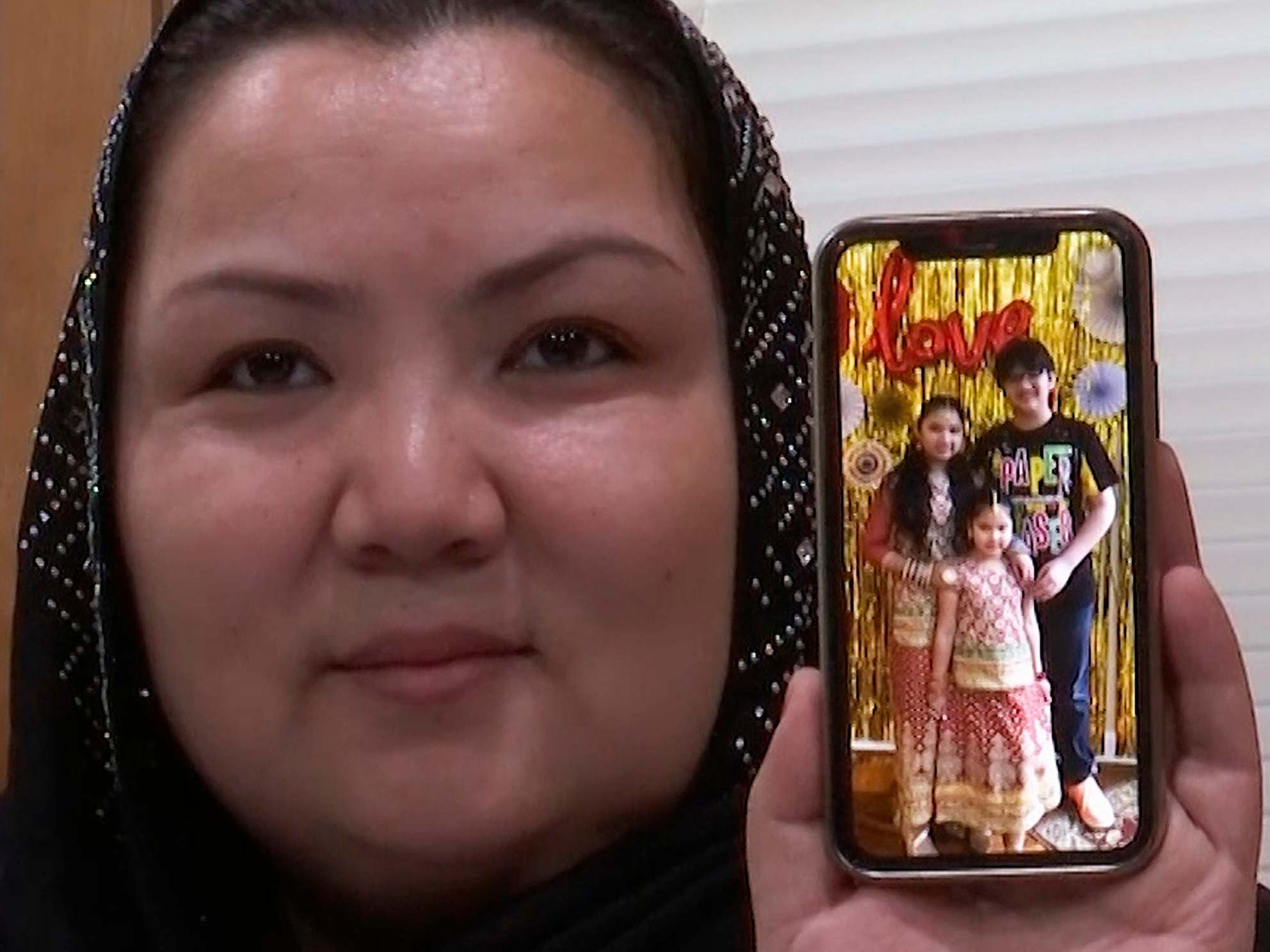 One day, they turned up with a list of at least 200 Uighur women in her compound with more than two children who had to get sterilised, Ms Dawut recalled.

“My Han Chinese neighbours, they sympathised with us Uighurs,” Ms Dawut said. “They told me: ‘Oh, you’re suffering terribly, the government is going way too far!”’

Ms Dawut protested, but police again threatened to send her back to the camp. During the sterilisation procedure, Han Chinese doctors injected her with anaesthesia and tied her fallopian tubes — a permanent operation. When Ms Dawut came to, she felt her womb ache.

After that frigid day when officials threatened to lock her up, Ms Omirzakh called relatives around the clock. Hours before the deadline, she scraped together enough money to pay the fine from the sale of her sister’s cow and high-interest loans, leaving her deep in debt.

For the next year, Ms Omirzakh attended classes with the wives of others detained for having too many children. She and her children lived with two local party officials sent specially to spy on them. When her husband was finally released, they fled for Kazakhstan with just a few bundles of blankets and clothes.

The IUD still in Ms Omirzakh’s womb has now sunk into her flesh, causing inflammation and piercing back pain, “like being stabbed with a knife”. For Ms Omirzakh, it’s a bitter reminder of everything she’s lost — and the plight of those she left behind.

“People there are now terrified of giving birth,” she said. “When I think of the word ‘Xinjiang’, I can still feel that fear.” 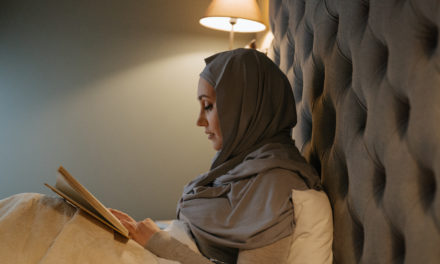 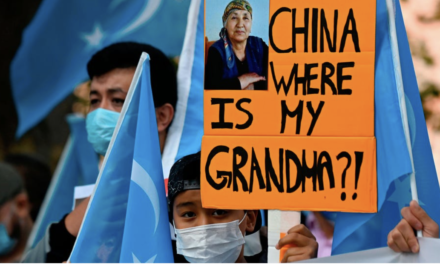