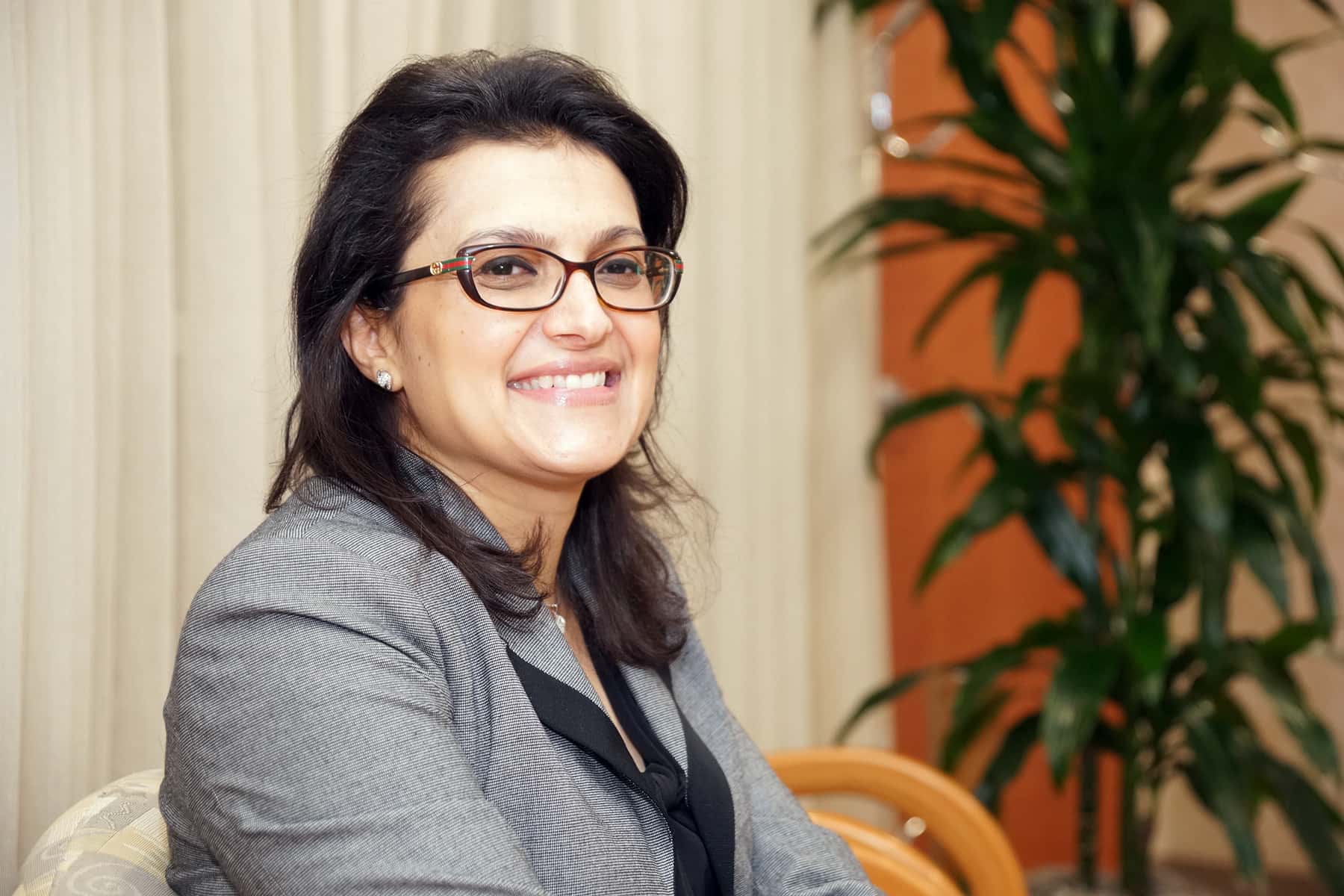 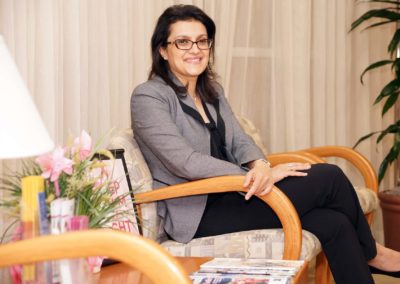 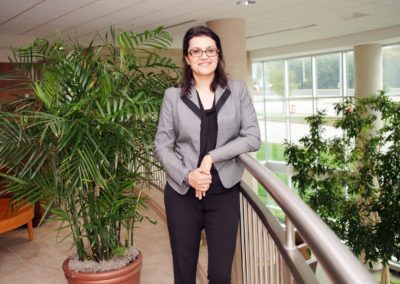 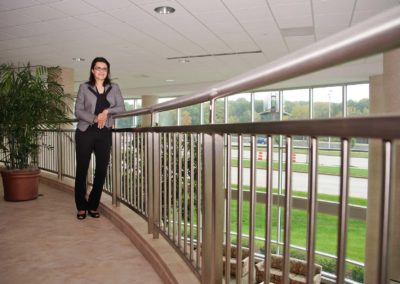 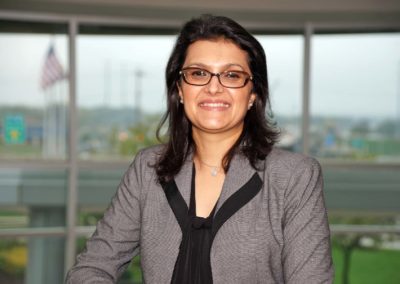 Growing up as a sickly child in Bahrain, Hanadi Bu-Ali M.D. made it her mission to become a doctor and try to cure all the sick children she knew. That life journey led to Milwaukee becoming her home, and specializing in Oncoplastic surgery for breast cancer. Dr. Bu-Ali’s creative passion and sensitivity has directed her attention to not only care about the well-being of people, but also those connected individuals and relationships impacted by illness.

Wisconsin Muslim Journal: What is your fondest memory of Bahrain, and is there anything about the country that you miss?

Dr. Hanadi Bu-Ali: My fondest memories are going on little hunting trips for antiques, especially musical instruments in the old market with my dad. Bahrain is a beautiful place; open, cosmopolitan, multicultural. Small yet packed with history and things to do. I miss that – the soft spoken, warm, kind natured people that would usually go out of their way to help. But above all else, I miss my immediate and extended family as well as friends who all still live there.

Wisconsin Muslim Journal: What was your experience like in medical school, and did you ever consider another direction for your career?

Dr. Hanadi Bu-Ali: I loved my experience in medical school in Bahrain. It adopted a conventional, problem-solving system instead of the traditional one. Instead of having to read and memorize chapter after chapter, we learned through researching objectives we were given in small group sessions of discussions related to organ systems. This makes you connect the dots and enhances critical thinking.

Growing up, I was a sickly child. So, I made it my mission to become a doctor and try and cure all the sick kids. I never thought of myself taking up anything else as a career. My focus, though, changed from the field of pediatrics to surgery after going through my clerkships. I loved being in the operating room and seeing the near immediate effect of the work being done. Growing up, I was quite involved with the arts – something that was nurtured at home, especially given that my dad played music himself. I was in the Bahrain music club for the gifted as well as did oil paintings and joined the theater club in school. I saw surgery as a form of art employed to help cure people and wanted to be part of it.

Wisconsin Muslim Journal: If you could send a message back in time to a younger version of yourself, what age would you select and what would you say?

Dr. Hanadi Bu-Ali: I would select the age of 24, right when I finished medical school. I’ve promised myself that I would push myself to be the best I could. I’ve always looked at the United States to do specialty and subspecialty training, but skeptics told me to forget about it because, as a foreign medical graduate, my chances were slim to none of getting into training in the U.S. I would say to myself, I am glad you were as stubborn as you were and pushed as much as you did.

Wisconsin Muslim Journal: Looking back on your life, what has been the most common obstacle for you because of your gender and faith?

Dr. Hanadi Bu-Ali: Despite moving to the U.S. just a month before 9/11 happened, I never felt that I was being discriminated against because of my faith. I have, however, felt discrimination due to being female, which is something my other female colleagues and surgeons experience as well regardless of faith or ethnic background.

Wisconsin Muslim Journal: How did you settle on Wisconsin for your medical career, and with opportunities in other states why do you remain here?

Dr. Hanadi Bu-Ali: My original plan was to finish training and return to Bahrain. However, in the year I was supposed to complete my fellowship, I lost my dad to a sudden heart attack. He was my rock and greatest supporter. He used to advise me to stay and practice in the U.S. for a couple of years to see how it goes. He knew that I wanted to do the best I could in my field, including being involved in cutting edge research and Bahrain might not offer that. He feared disappointment and frustration on my behalf. I, however, wanted to return home. When my dad passed away, I couldn’t face going home without him being there. So, I decided to stay and practice for a couple of years to allow myself to heal. This was 11 years ago.

The reason why I settled on Wisconsin is two-fold: 1) the health system I joined was looking to build a breast program and wanted a fellowship trained breast surgeon to help them with that. Despite being offered other opportunities on the east coast, I saw this as a challenge and I loved challenges. Some of my fellow breast surgeons who I met during training thought I was either bold or crazy trying to do that straight out of fellowship instead of joining a well-established program. I, however, saw it as an opportunity to be a part of something that is being built. 2) I had several connections in Chicago; friends from my training program in Michigan and others from a youth program sponsored by the Japanese government that I was a part of in the late 1990s. I did leave Wisconsin for a couple of years to explore other opportunities and settled on the Twin Cities, but found myself driving back to Milwaukee every opportunity I had. Over the 8 years that proceeded me leaving to Minnesota, I formed relationships both at and outside work that I cherished. Milwaukee became and remains home. Wherever I travel, including to my birthplace, I know I’m back home when I’m in Milwaukee.

Wisconsin Muslim Journal: How have you seen your field of medicine change over the past couple decades?

Dr. Hanadi Bu-Ali: The field of breast care is ever changing. There is so much research into breast cancer and new guidelines get released quite frequently, to the extent that something practices 2 years ago might now be obsolete.

Wisconsin Muslim Journal: What led you to specialize in breast surgery, specifically oncoplastic surgery? And what do you find most rewarding about it?

Dr. Hanadi Bu-Ali: Breast surgery includes both men and women as breast disease, including cancer, is not exclusive to women. So, my patient population includes both genders. When I was an intern in surgery in Bahrain, I did not like the breast care that was offered to patients. So, I decided I wanted to do something about it. When I came to the United States in 2001 to start my training in general surgery, I asked my mentor about subspecialty training for breast and was informed that it did not exist at that time. So, I shifted my focus towards plastic surgery and that was my initial plan. That plan however changed when specific training in breast surgical oncology came into existence.

Oncoplastic surgery means cancer surgery with the best possible cosmetic outcome. I’ve always believed that there should be significant thought put into the surgical approach to ensure, after proper cancer surgery, the best cosmetic outcome could be attained. Surgery should not equal mutilation and, with most women surviving their disease due to advances in treatment, how they look and feel should matter.

Wisconsin Muslim Journal: Why do you advocate for inclusion with your patients, regarding treatment, and what inspired your holistic thinking about the wellbeing of those who you care for?

Dr. Hanadi Bu-Ali: There is no one size fits all when it comes to breast care. What works for one patient might not work for another. The patient is a whole individual with many things to consider including psychosocial issues – as well as other people connected to this individual, the lives of which would be impacted by what treatment this individual might get and their reaction to that treatment. So, you’re not just cutting a tumor out. You don’t want them to just beat the disease but beat it and live well; feel well, look well. Also, some might not choose the best possible treatment for themselves due to myths or misconceptions. My duty as a physician, is to educate; not force or dismiss because it’s their health and their lives. I’m just there to help.

Wisconsin Muslim Journal: What would you say to a young girl who wants to attend medical school someday, but may not have the resources to realize her dream?

Dr. Hanadi Bu-Ali: Don’t give up. Impossible is a word that only exists in the vocabulary of those who do not try. So, keep trying. Never quit. When there is a tomorrow, there is always a possibility. 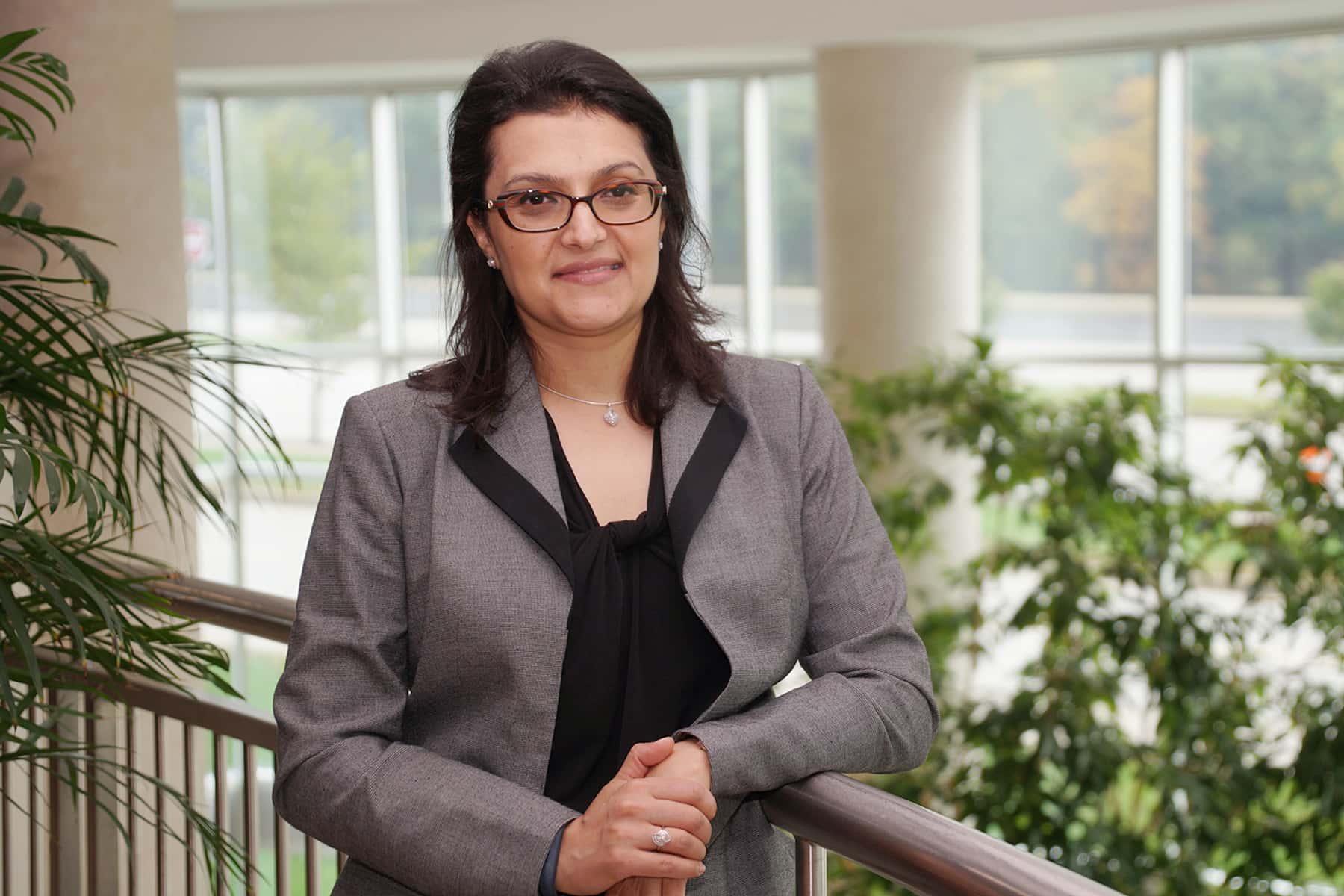 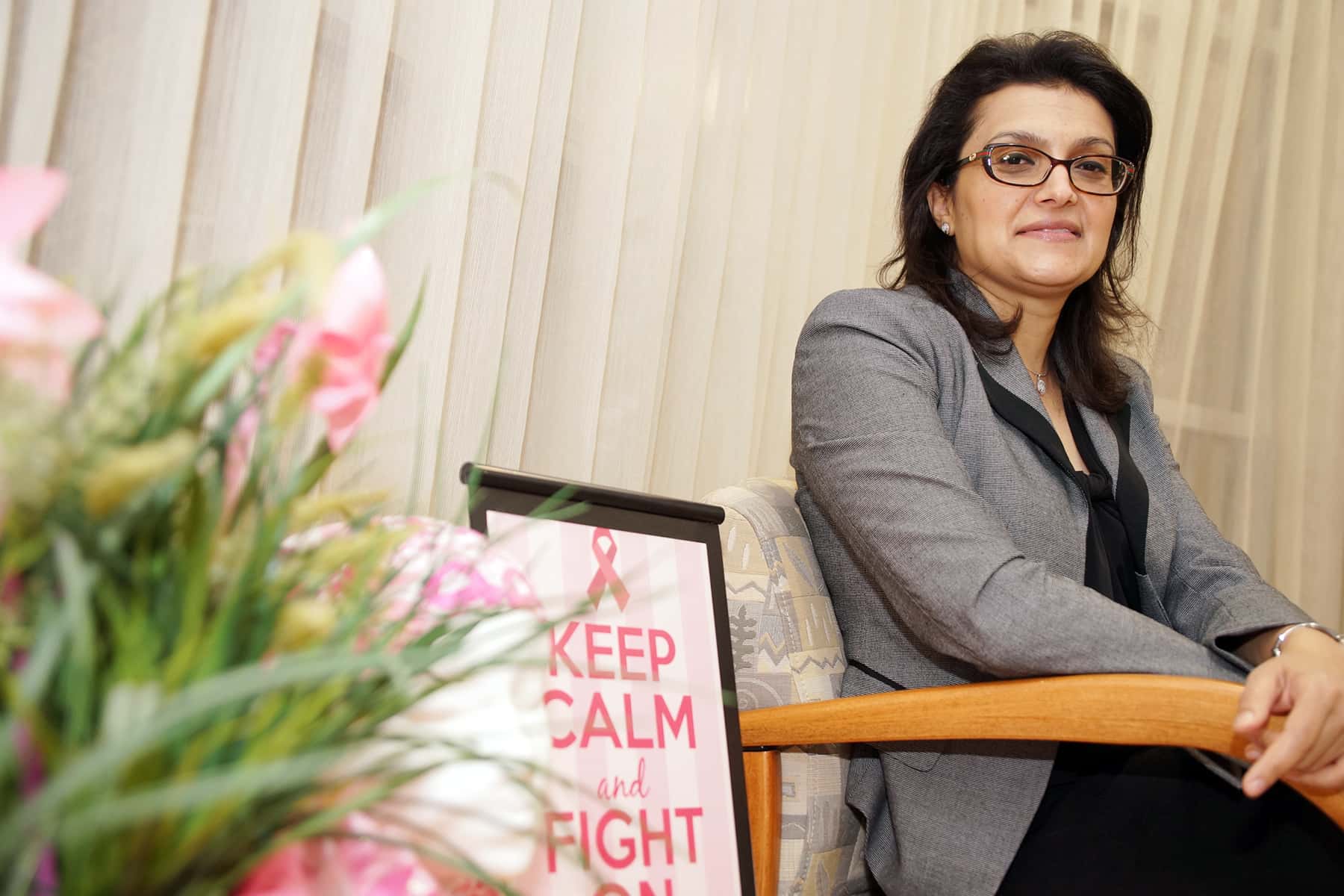 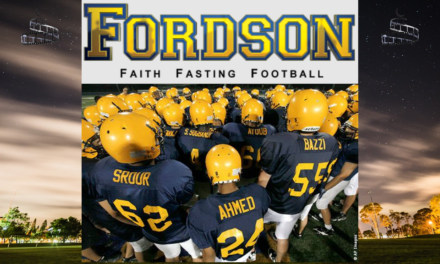 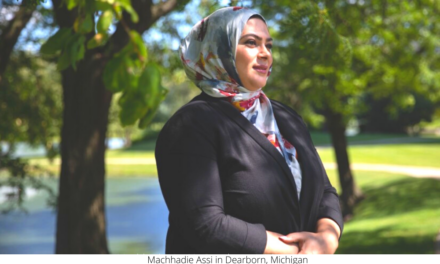 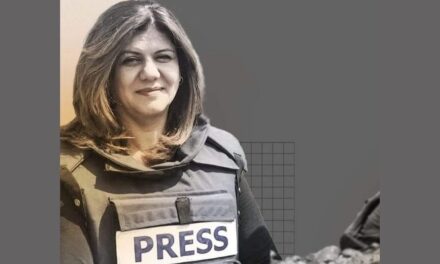 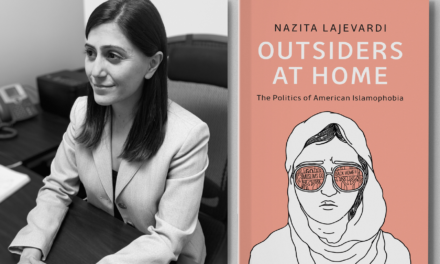