How U.S. Wars Abroad Are Intimately Tied to Police Brutality at Home 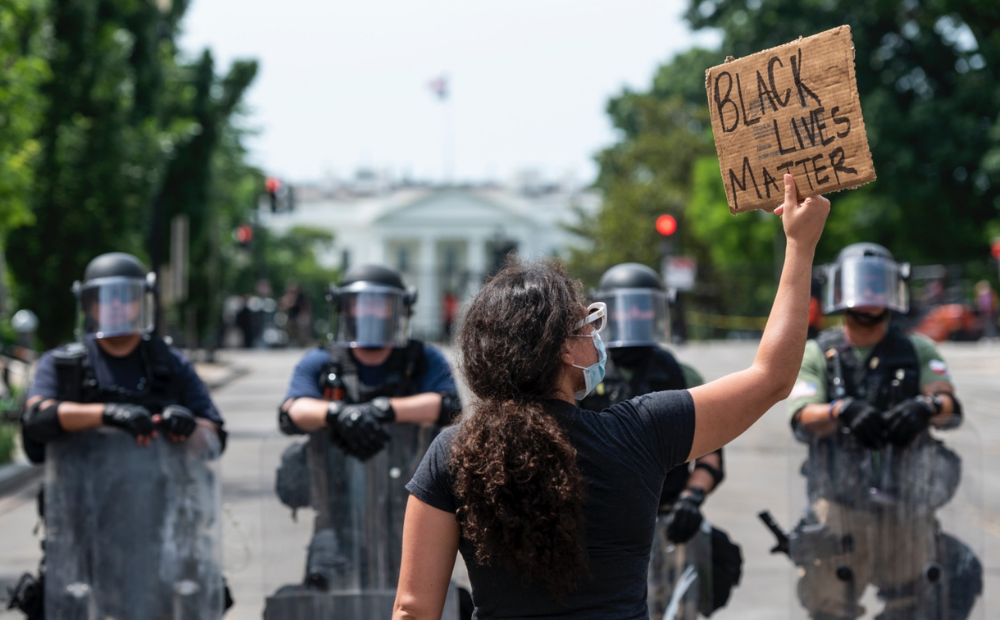 A protester holds up a Black Lives Mater sign in front of federal security forces in front of the White House during police brutality protests in Washington on June 3, 2020, in response to George Floyd’s murder.

There are obvious links between anti-war movements against U.S. militarism and Black Lives Matter activism against police brutality. Is time for activists to join forces?

When U.S. Rep. Ilhan Omar decried Israel’s 11-day aerial bombardment of Gaza this May and declared that “Palestinians deserve protection,” Florida’s Republican U.S. Sen. Marco Rubio responded by saying that Israeli violence and U.S. support for it were justified because Israelis “live in a very tough neighborhood.”

Rubio did not invent that phrase or its use in describing Israel’s place in the region where it sits. In 2016, 82 hawkish senators signed onto a letter to President Barack Obama advocating greater guarantees of military aid to Israel, saying that “members of Congress from both parties have been proud to work with you and previous administrations to provide Israel the essential resources it needs to survive in a very tough neighborhood.”

Conservative think tank analysts also use the term, such as Aaron David Miller of the Carnegie Endowment for Peace—who calls Israel “a tiny state in a tough neighborhood”—as do critics of U.S. policy toward Israel. For example, Transportation Secretary Pete Buttigieg has used the phrase, “a challenging neighborhood” and progressive U.S. Sen. Elizabeth Warren (D-MA) has said, “I think Israel is in a really tough neighborhood.”

The significance of American officials describing Israel as placed in a dangerous neighborhood is unmistakable. In the racist geographies of the United States, “tough neighborhoods” are to be avoided, they are to be policed, and they are inevitably Black. The trope of the “dangerous neighborhood” is so widespread that it communicates all of these things without explanation. This makes it a perfect device for people across the U.S. political establishment to justify military aid and other support to Israel—whether enthusiastically or with some reservations—to an American audience.

Indeed, its relationship with Israel includes a minimum of $3.8 billion in U.S. military aid each year as well as extensive exchanges between American police departments and Israel. U.S. police departments train with Israeli forces, with the aim of mutually enhancing each side’s ability to patrol its “neighborhoods.”

The “Israel is in a tough neighborhood” trope is one of countless entry points into the relationship between the racist domestic repression regime of the U.S. and the violence that it carries out and supports abroad. These relationships are long-standing, rooted in the colonization of the land and requisite violence against its Indigenous peoples, and the enslavement of the Black population. The foundational violence and surveillance necessary to dispossess Native peoples of land and maintain slavery—which have evolved to be deployed against racialized groups of migrants to what would become the United States—has had utility in imposing the U.S. will abroad too.

This connection between U.S. violence within and beyond its borders is important, especially in light of a renewed national conversation about American policing. That conversation, driven by Black-led uprisings in response to the murders of George Floyd, Breonna Taylor, and others in 2020, has revealed the predatory, racist nature of policing. It has exposed the failure of the criminal justice system to provide justice for victims of police violence. It has called attention to the roots of American policing in slavery, and it has launched a mainstream discussion about defunding and abolishing police departments. It has also highlighted the militarization of police, offering an opportunity to bring greater attention to the practices of forces that operate domestically, and those U.S. and U.S.-supported forces acting abroad.

This historical depth of the unfolding “racial reckoning” conversation is welcome and relevant to both an exploration of police and military violence today. Forms of violence honed against Indigenous and Black populations in the fledgling United States were not left in the past, unrelated to the militarism of our time. On the contrary, these histories produced methods that inform and refine U.S. violence in ongoing ways. As historian Roxanne Dunbar-Ortiz points out in An Indigenous Peoples’ History of the United States, the U.S. military uses countless terms from the conquest of the continent in the “Indian Wars” to label its operations and weapons today. Dunbar-Ortiz writes that Pentagon officials referring to restive places in Iraq and Afghanistan as “Indian Country,” giving Osama Bin Laden the codename “Geronimo” in the Navy SEAL operation that assassinated him, and naming Army helicopters “Blackhawk” and “Apache” are “recent examples of the persistence of the colonialist and imperialist sensibilities at the core of a military grounded in wars against the Indigenous nations and communities of North America.”

This violence does not just travel in one direction—from the Continental United States to places beyond it—via wars. U.S. imperial violence elsewhere also fuels and informs policing, militarism, and racist violence domestically. The U.S. declaration of war against Japan during World War II involved the domestic internment of people of Japanese origin. American soldiers who tortured Vietnamese people during the U.S. war in Southeast Asia in the ’60s and ’70s brought their brutal methods back to the U.S. as police officers in Chicago, torturing Black residents in the ’80s and ’90s. And, as Asian scholars and activists have argued, particularly in light of the rise of anti-Asian violence, U.S. militarism in the Pacific informs racism and misogyny that targets Asians—and especially Asian women—here. Writer and organizer Cynthia Dewi Oka offers histories of genocidal U.S. violence in Asia as “context for the massacre of Asian women in Atlanta,” adding, “It has been the most normal thing for Americans to kill Asians.”

The deep nature of the relations between places and groups of people in the United States and around the world does not only mean that we are bound together by oppression and violence. It also means that we are linked by resistance.

There are rich histories of resistance against U.S. empire for mutual liberation. In one such chapter, at the height of the U.S. war in Vietnam, radical Black soldiers stationed in Okinawa supported the local struggle against the enormous U.S. troop presence and militarization of Okinawa. A leaflet distributed by Black soldiers to Okinawans in 1970, written in English and Japanese, declared that “Black GIs are trying to become part of the solution, not the problem. The Black GIs are willing to talk to the Okinawans in order to form much better relations between the oppressed groups, because we have so much in common.”

Historian Wesley Iwao Ueunten frames such acts in a context of solidarity between Okinawans struggling against the enormous U.S. troop presence in Okinawa and Americans—particularly Asian, Latino, and Black Americans on American campuses, in Black neighborhoods, and on and around military bases themselves. “In an age long before ‘transnationalism’ became widely used,” Ueunten writes, “and before faxes, the internet, affordable international flights and cheap long-distance phone calls made it easier to travel between the corners of the U.S. global empire, political movements in the United States were strongly conscious of what was happening in Okinawa.”

The racist nature of the violence that the U.S. carries out and supports abroad—and its grounding in domestic U.S. racism—provides for connections and solidarity with those on the receiving end of U.S. violence abroad and with Black America in particular. We are in a powerful moment, for example, of Black and Palestinian solidarity. This includes campaigns to stop exchanges between U.S. police and Israel, as well as other acts of protest against the support of Israeli violence by American institutions. In his recent resignation from the faculty of Harvard University, for instance, scholar Cornel West notes among a list of grievances that the “Harvard Administration’s hostility to the Palestinian cause was disgusting.” This comes after years of Black public intellectuals like West, Angela Davis, Michelle Alexander, and Marc Lamont Hill using their voices to lift up solidarity with the Palestinian freedom struggle.

Indeed, the recent decision by Ben & Jerry’s to stop selling its products in Israeli settlements in the West Bank and East Jerusalem in protest of Israel’s occupation of those places was pushed in significant part by Black Lives Matter activists.

The linkages between U.S. violence in the heart of the empire and places around the world are many, and the need to deepen an awareness of them is urgent. In light of the reduction of the U.S. troop presence in Afghanistan, for example, Stephen Semler of the Security Policy Reform Institute points out that weapons from occupying forces may see an afterlife in the hands of U.S. law enforcement. If American police find themselves newly armed with guns and vehicles that were once used in Afghanistan, it will be through the 1033 Program—which is a conduit for the Pentagon to direct used weapons from battlefields abroad to police departments here.

The links between American policing and violence around the world, therefore, are organic. So too should be the opposition to police abuses here and the abuses that the U.S. carries out around the world. Current calls to defund the police converge with long-standing demands to cut the Pentagon budget and reinvest funds that have been used for war and militarism into social spending to provide for human needs.  The calls to defund the police are precisely aimed at a conversation about investing public wealth into education and social services rather than policing—a discussion that mirrors calls to redirect war funding into public benefit.  Activists today pursuing such conversations and action have the inheritance of proud histories of transnational solidarity against empire to draw upon, and are challenged to renew and deepen them in our time. 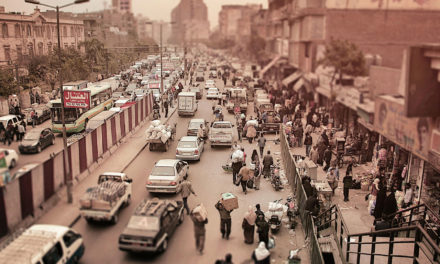 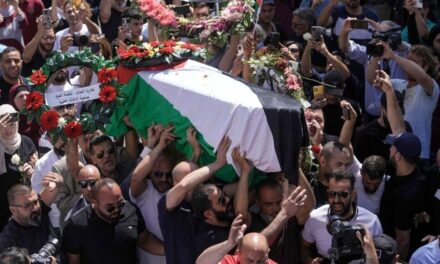 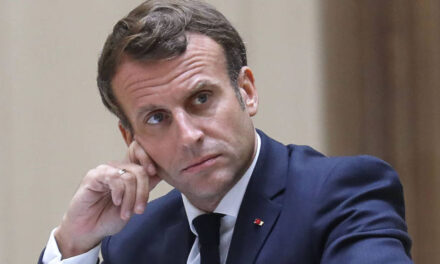 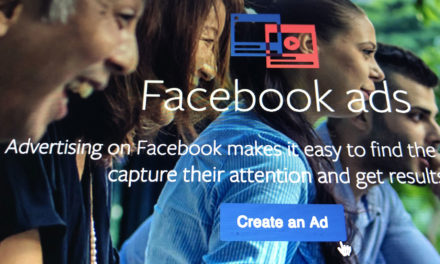