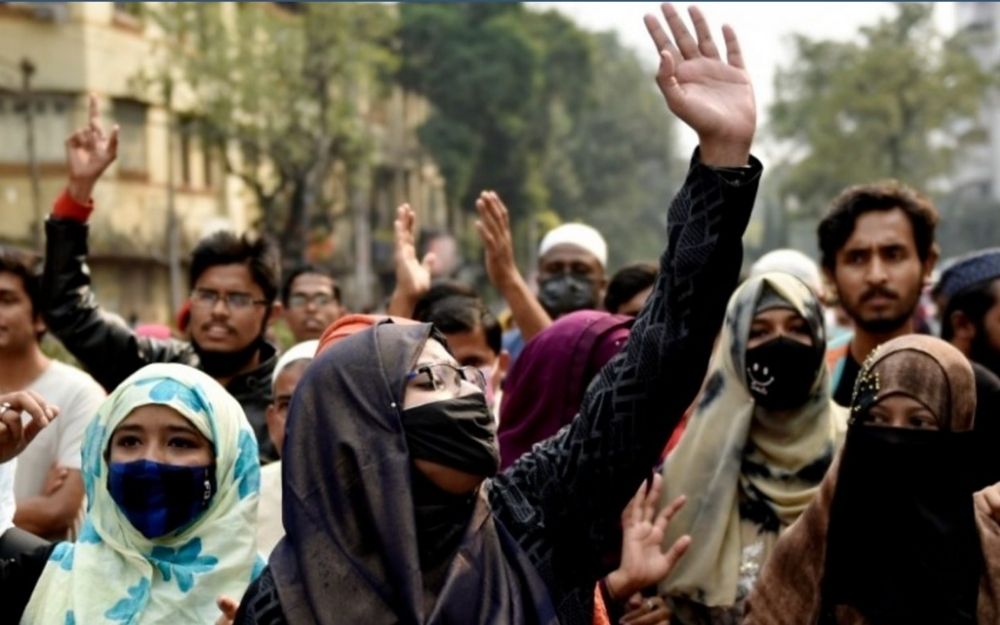 Protests erupt over the hijab row in Karnataka

An Indian state has shut high schools and colleges for three days, after a row over Muslim women wearing headscarves in the classroom that has gained international attention.

The government of Karnataka state took the decision after protests by students over the hijab escalated into violence.

On Wednesday, a judge at the state’s high court referred petitions challenging the ban to a larger panel.

Protests have now spread across the country.

Hundreds of people demonstrated against the ban in Kolkata and Chennai, two of India’s largest cities, and in Hyderabad. And the Pakistani government summoned the Indian ambassador to formally convey its concern.

The decision to close the schools and colleges in the southern Indian state came after protests by six teenage students at a government-run college over wearing hijabs spread to other colleges.

Several Hindu students then turned up wearing saffron shawls – the colour seen as a Hindu symbol – to protest against Muslim women wearing hijabs.

On Tuesday, Nobel Prize-winner Malala Yousafzai, who was 15 when she survived an attack by the Taliban in Pakistan for speaking up for the right of girls to be educated, weighed in. She called on India’s leaders to do something to “stop the marginalisation of Muslim women”.

“Refusing to let girls go to school in their hijabs is horrifying,” the 24-year-old activist tweeted. “Objectification of women persists – for wearing less or more.”

In India, the stand-off has increased fear and anger among minority Muslims, who say the country’s constitution grants them the freedom to wear what they want.

Viral videos show a Muslim woman being heckled by a mob of young men shouting slogans, and heated arguments between students wearing hijabs and saffron shawls.

How did the row begin?

The issue began gaining attention when the students at the pre-university college – equivalent to a high school – in Karnataka’s Udupi district began protesting over the hijab ban. 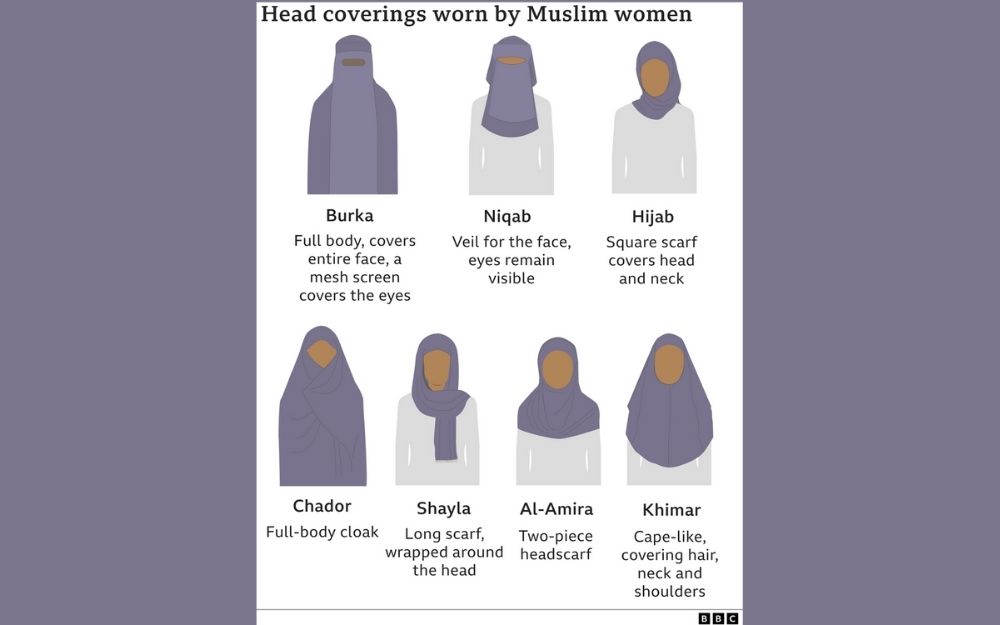 The college said it allowed students to wear the hijab on campus and only asked them to take it off inside the classroom. But the protesters – who all wear the mandatory college uniform – argued they should also be allowed to cover their hair in the classroom.

It is not unusual to see women wearing hijabs and burkas – the full Islamic veil – in India, where public displays of symbols of faith are common. But the college principal said it was necessary for the teacher to see the student’s face and the uniform helped them ensure there was no discrimination among students.

How did it spread to other colleges?

The issue of Muslim women wearing hijabs had cropped up in a few other colleges in Karnataka earlier too, but it started gaining momentum when photos of the women protesters in Udupi went viral.

Hindu students in some other colleges began coming to classes wearing saffron shawls, which forced officials to insist that both could not be allowed on campus.

Last week, a video showing gates being shut on a group of hijab-clad students – shot at a pre-university college in Kundapur in Udupi district – led to outrage. 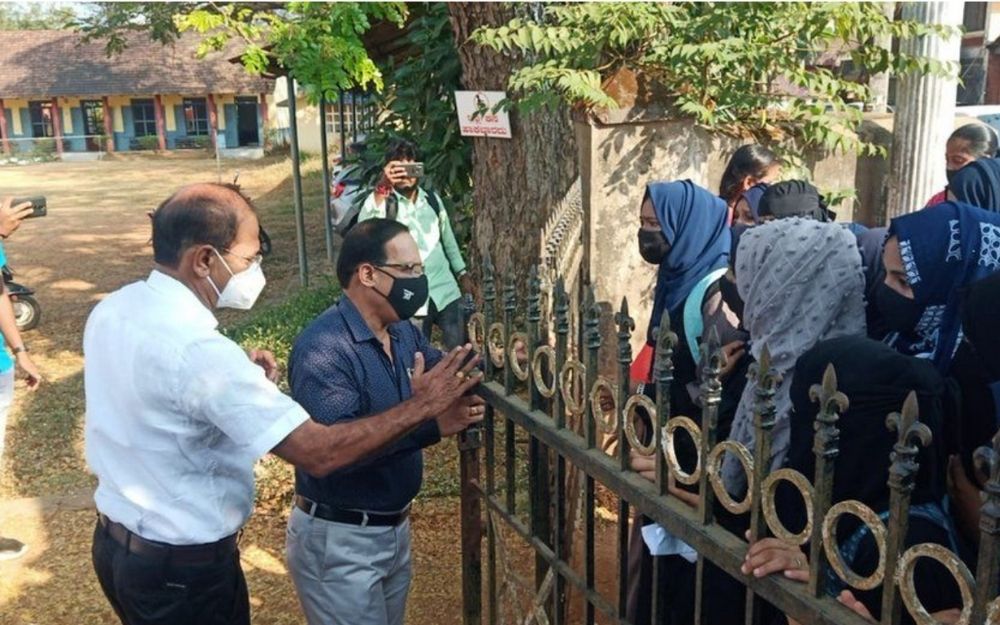 Groups of Hindu students – both male and female – also began going on marches against their classmates wearing hijabs.

But there was no violence until Tuesday. Hours before the court began hearing the petition, incidents of stone-throwing and even arson were reported from some cities.

Local authorities imposed Section 144, a colonial-era law that prohibits the gathering of more than four people in one place.

In Shivamogga district, a group of male students were caught on camera hoisting a saffron flag at their college, prompting the government to announce an inquiry.

In Mandya district, a video showed a young woman wearing a hijab being approached by a mob of men with saffron shawls. As they yelled “Jai Shri Ram” (hail Lord Ram) repeatedly, she stood her ground, shouting “Allahu Akbar” (God is great) as college authorities escorted her away.

A senior police official told BBC Hindi that these were all “minor incidents”.

What has the state government said?

Karnataka Education Minister Nagesh BC has backed college authorities who say both saffron scarves and headscarves should be banned on campuses.

He has also alleged that the students are being instigated to protest by “miscreants”.

“It’s basically politics. All this is happening because state assembly elections are due next year,” Mr Nagesh told BBC Hindi, referring to attempts by the Popular Front of India’s political wing to gain traction in the region.

Chief Minister Basavaraj S Bommai and the state’s home minister have urged the students and others to “maintain peace and harmony”. 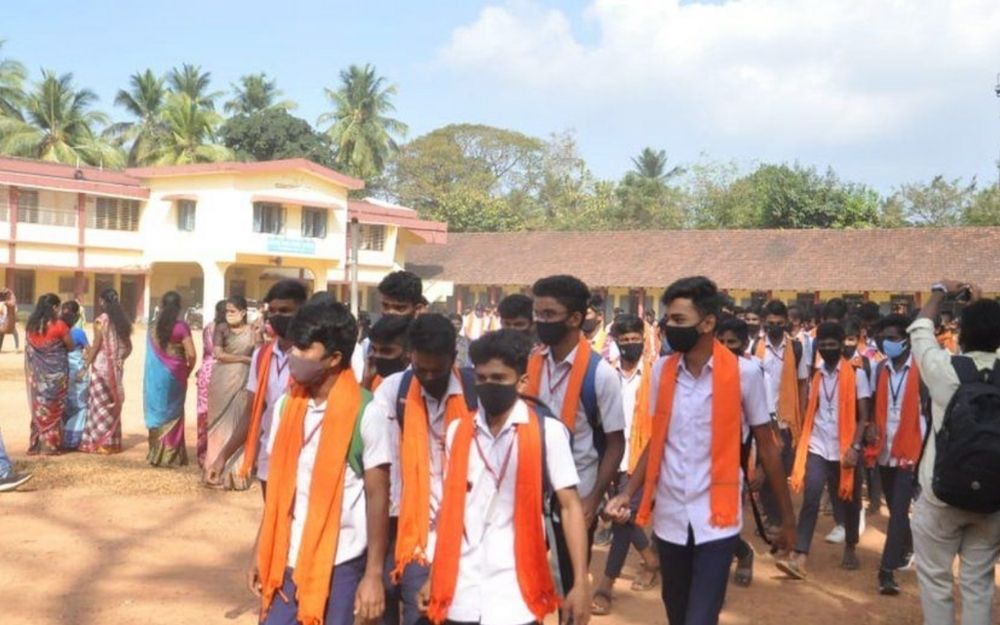 Many Hindu students have come to college wearing saffron scarves

What did the court say?

On Wednesday, Justice Krishna Dixit, who was hearing two petitions filed on behalf of the Muslim women protesters, said the matter should be referred to a larger bench.

“Having regard to the enormity of questions of importance which are debated, the court is of the considered opinion that the papers be put at the hand of the chief justice to decide if a larger bench can be constituted in the subject matter,” said the judge, legal news website Live Law reported.

Of the two petitions, one argues that choosing what to wear is a fundamental right guaranteed by India’s constitution. The other questions the legality of a recent state government dress code order for educational institutions, which bans headscarves and hijabs.

Their lawyer had argued that the government’s order on banning the hijab was both unconstitutional and illegal – he had also asked the court to pass an interim order that would allow the students to attend classes ahead of exams.

According to Live Law, Justice Dixit also said the petitioners could seek interim relief after the chief justice took a decision on forming a larger bench.