Religiously mandated practices are protected both by the First Amendment.

“Religiously mandated practices are protected both by the First Amendment, which protects the freedom of religion, and Title VII of the 1964 Civil Rights Act, which provides that an employer may not discriminate against a person due to religion and should accommodate an employee’s religious practices, unless it causes undue hardship.” – Islamic Networks Group (ING)

As our nation grows increasingly diverse, it is important to understand and try to accommodate the religious practices of all our employees to the best of a corporation’s ability. The following are some common religious practices which may impact some Muslim employees on the job. While these are practices of a typical, religiously observant Muslim employee, it is important to remember that Muslims are not monolithic.

American Muslims are a growing part of the corporate landscape, contributing to all walks of life, in a variety of professions. A better understanding of our Muslim neighbors and co-workers will both enrich our own lives, and make theirs easier. In our increasingly diverse and multi-cultural society, education, understanding, and tolerance are the keys to a harmonious workplace and society.

Islam prescribes five daily prayers in the morning, noon, afternoon, evening, and at night. The noon and afternoon prayers usually fall during work hours. Before praying, Muslims are required to wash their hands, mouth, nose, face, arms, and feet. A sink or other facility is needed. During the prayer, Muslims stand, bow, and prostrate. The prayer should be performed in a quiet, clean, dry place such as an employee’s offices or any other suitable work space. They are not able to respond to someone talking to them or to a telephone call while they are praying.

The time required for washing and prayer is about 10 to 15 minutes. The noon prayer can fit in during lunch breaks, and other prayers during coffee breaks as needed. Friday is the day for congregational worship, which includes a sermon and prayer during the time of the noon prayer. It takes place at a mosque or hall, and lasts about 45 to 90 minutes. A Muslim employee should be able to complete the Friday prayer during an extended lunch break.

During the month of Ramadan, the ninth month of the Islamic lunar calendar, Muslims are required to refrain from food and drink from sunrise to sunset. Ramadan is also a time of increased devotion and moral conduct. Muslim employees continue to work during Ramadan; the only change is that they will not be able to eat during lunch times, but will need to eat after the sun sets. Especially in winter when the days are short, this may mean that an employee may need to shift his/her schedule, perhaps working through the lunch break and leaving slightly early. Travelers, sick people, the elderly, as well as pregnant and nursing women are exempt from fasting in Ramadan, but may choose to fast anyway. Ramadan is part of the Islamic lunar calendar, so it moves 11 days earlier each year; and its beginning and end is determined by the sighting of the new moon. Both factors make it more challenging for employees to plan for than regular holidays.

Muslim adults are required to go on a pilgrimage to Mecca (Hajj) at least once in their lifetime if it is financially and physically possible. The pilgrimage lasts for only five days, but most people remain in the area for about two weeks. Muslim employees may choose to use their vacation days to perform the pilgrimage.

Twice a year, first at the end of Ramadan and again during the time of the pilgrimage, Muslims celebrate Eid, meaning “festival’ for a period of three to four days. Both celebrations, like Ramadan, follow the lunar calendar, so that the dates move around the year, and are determined by the sighting of the new moon. The holidays are celebrated with congregational prayers, visiting friends and exchanging gifts. Muslim employees may request to take time off for the first day of the holidays twice a year for these celebrations just as employees of other faiths take days off for their holidays.

Islam prohibits the consumption of alcohol and pork. Some Muslims also follow the injunction to eat only meat and poultry that has been slaughtered in a specific manner, known as ‘halal’, (literally meaning permissible) which is similar to kosher. In situations where halal meat is not available, vegetarian dishes, dairy and fish products are a good alternative.

Islam prescribes that both Muslim men and women behave and dress modestly and that they should be valued for their skills and character, not their physical attributes. Some Muslim men wear beards and may wear a skull cap. Some Muslim women wear loose fitting, non-revealing clothing which covers everything except their face and hands. The head scarf is part of their modest attire and women in head scarves should be treated similar to men who wear skull caps or turbans.

Again, because of the emphasis on modesty between genders, some Muslims may be reluctant to shake the hand of an unrelated person of the opposite gender. This should not be taken as an insult, but as a sign of personal modesty. Similarly, some Muslims may avoid sustained eye contact with someone of the opposite gender, not because of an unwillingness to communicate, but again due to modesty. During social events where there is dancing, or alcohol being served, some Muslims prefer not to participate for religious reasons and should not be penalized for this choice. Because of the prohibition against selling or drinking alcohol, Muslim employees may also want to avoid serving or selling alcoholic beverages. 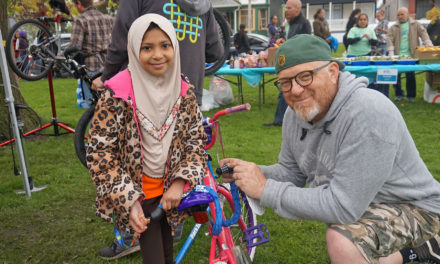