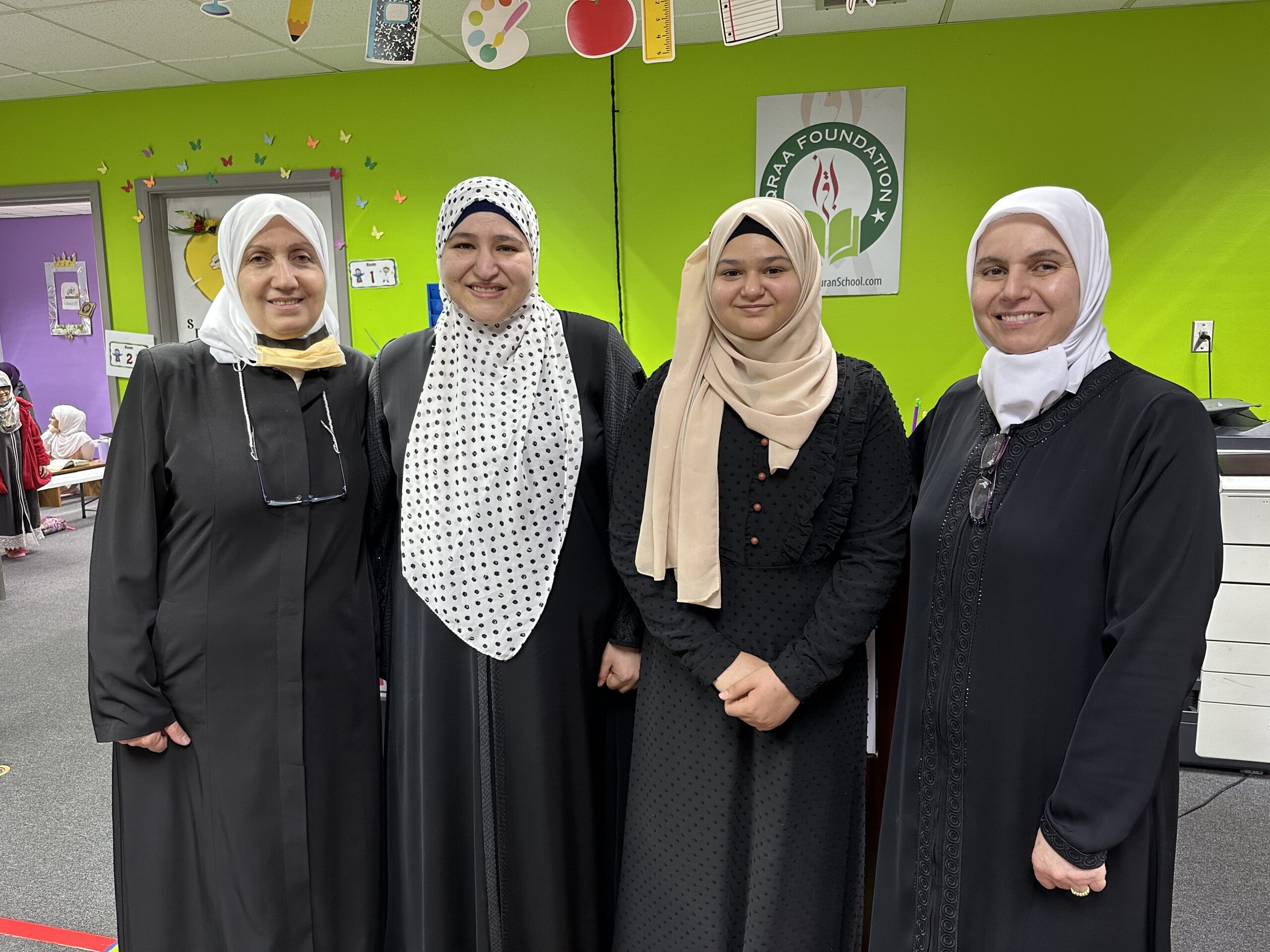 “My life totally changed in 2016,” wrote Nouralhuda Thaher, 14, about the year she began her study to become a hafidha, a woman who has memorized the entire Qur’an and “retains its beautiful verses in their hearts and minds,” explains an article in the Saudi Gazette.

In an essay she wrote for a high school class, Thaher recalled when she and her parents decided she would leave public school after completing second grade to memorize the 604-page Qur’an at Iqraa Qur’an School, 5210 Loomis Road, Milwaukee.

“This is a bad decision,” she heard them say. “Yes, we want you to know how to read the Qur’an, but not to give up your life. You’re not going to have a proper education. You won’t have a social life.”

Now a hafidha and a ninth-grader, partially online, through the Oak Creek-Franklin Joint School District, Nour, as her friends call her, is a straight-A student taking her first Advanced Placement (AP) class. She is also helping teach Qur’an recitation to other girls while continuing to study at Iqraa Qur’an School to become a certified hafidh teacher.

She plans to eventually become a doctor but “will always study and teach Qur’an,” she told Wisconsin Muslim Journal in a recent interview at Iqraa Qur’an School with her mother Manal Hassan, both of Oak Creek.

In addition to its after-school, Saturday and summer classes for children in Arabic, Islamic Studies and Qur’an, Iqraa Qur’an School offers part-time and full-time hafidh programs to girls and women. “Part of our vision is to brighten our ummah (Muslim community) by empowering girls and women alike to become hafidhas,” its website states.

How to become a hafidha

The experience of girls and women who join the hafidh program at Iqraa Qur’an School resembles the experience of Hanadi Shammout, founder and principal, had in Damascus, Syria, as a young teen. As a middle school student, she started memorizing the Qur’an with a group of girls and a teacher who gathered in a home. She finished memorization of the entire Qur’an sometime in high school thanks to the guidance and encouragement of her teacher, she said. 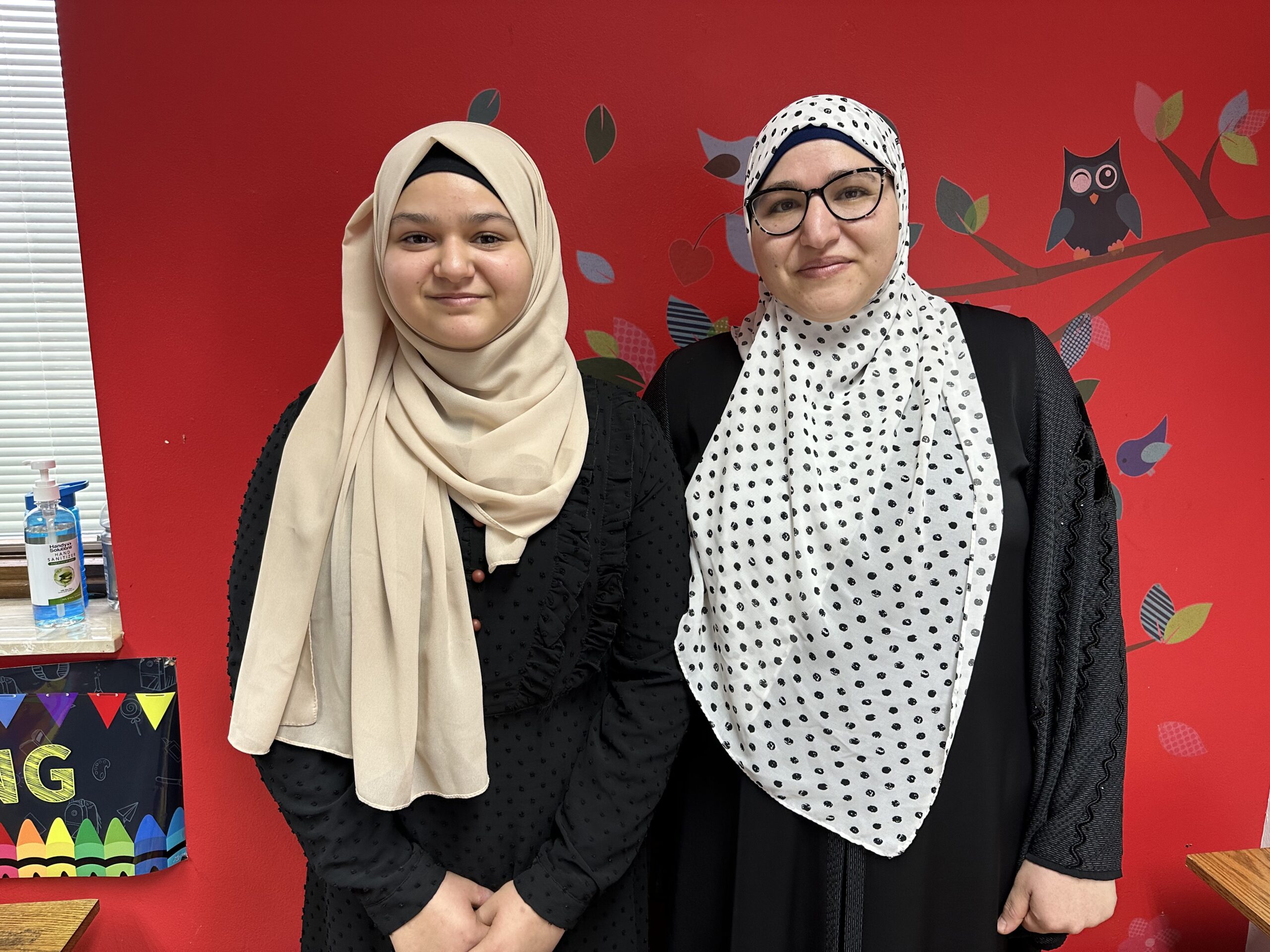 Nouralhuda Thaher, 14, and her mother Manal Hassan of Oak Creek

After high school, she continued working on oral recitation of the Qur’an with a teacher who was certified in the line from the prophet. “The truest path, the one you can trust” for accuracy, she said.

Her teachers were supportive yet strict, Shammout recalled. They would listen to her recite and patiently correct her. But if she made too many errors, the teacher stopped the lesson. They told her to go home and work hard before she came back.

“I was blessed with memorizing the Qur’an and then the opportunity to teach,” she said. “My teacher told me to always serve the deen (religion) of Prophet Muhammad (PBUH). I’m very passionate about this.” Shammout became a teacher herself in Syria.

“When I memorized the Qur’an, I felt the blessing of Allah and I have continued to feel it every day of my life,” she said. “I wanted my kids and others to have this experience. It’s not easy but you’ll find every struggle is something you can handle. It will go smoothly. This is the blessing of the Qur’an.”

When Shammout moved to Milwaukee, she taught Qur’an to groups of women meeting in homes. Then she established Iqraa Qur’an School as a nonprofit. It operated in space provided by the Islamic Society of Milwaukee and then Masjid Al Huda, until becoming the renter of its current space. 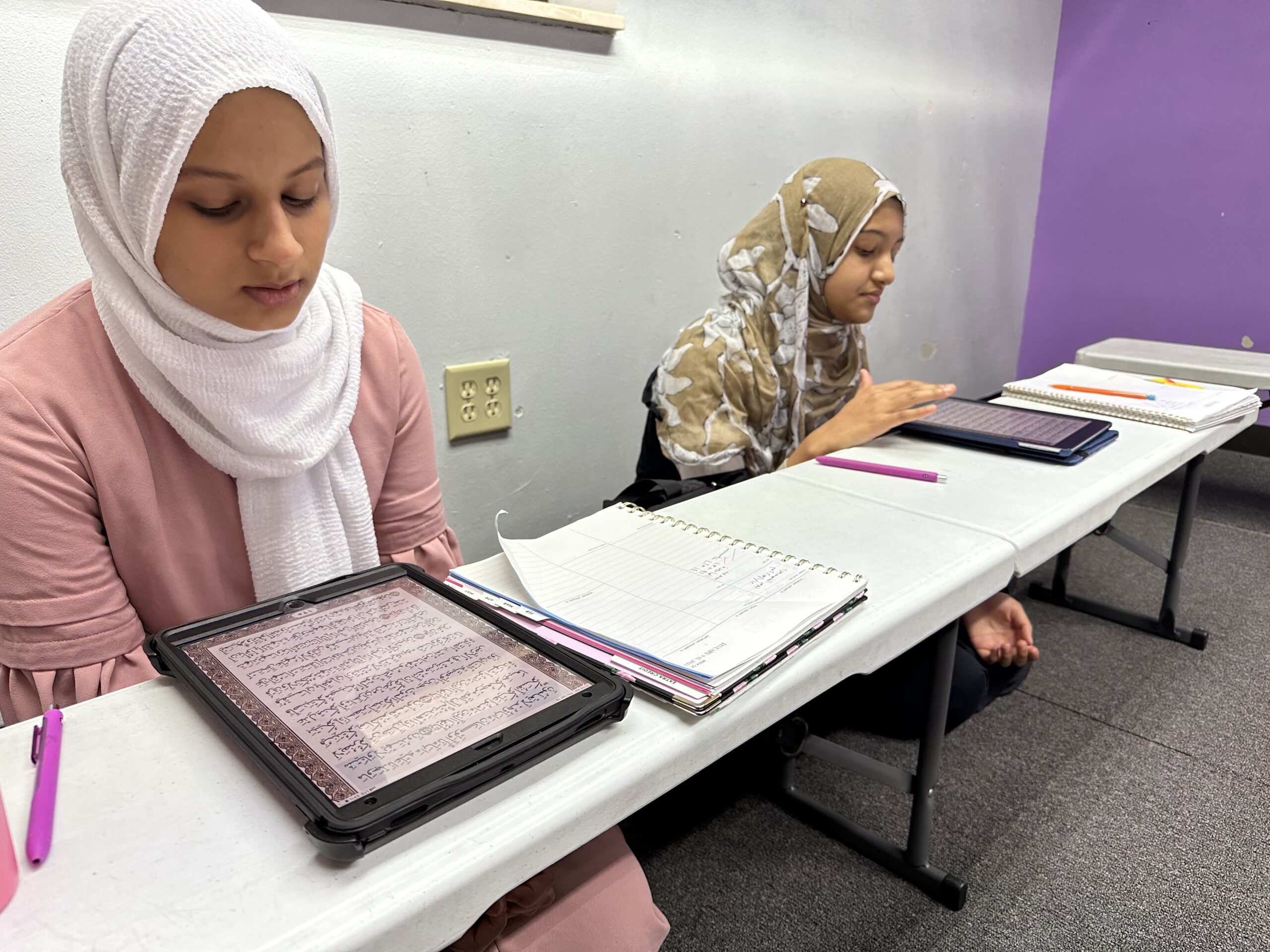 “My husband, Mosbah Shammout, had a big role as he supported me through my entire journey,” she added.

Inside Iqraa Qur’an School, the décor is bright and cheerful. Signs on the walls remind students to be kind to each other, to be honest and fair.

“I really want the message to be to love the Qur’an, that love and mercy are Islamic values, that being obedient to your parents, good to your family and respectful to your teachers is the Islamic way,” Shammout said. “If they learn Islam, they will be wonderful people in their community.” 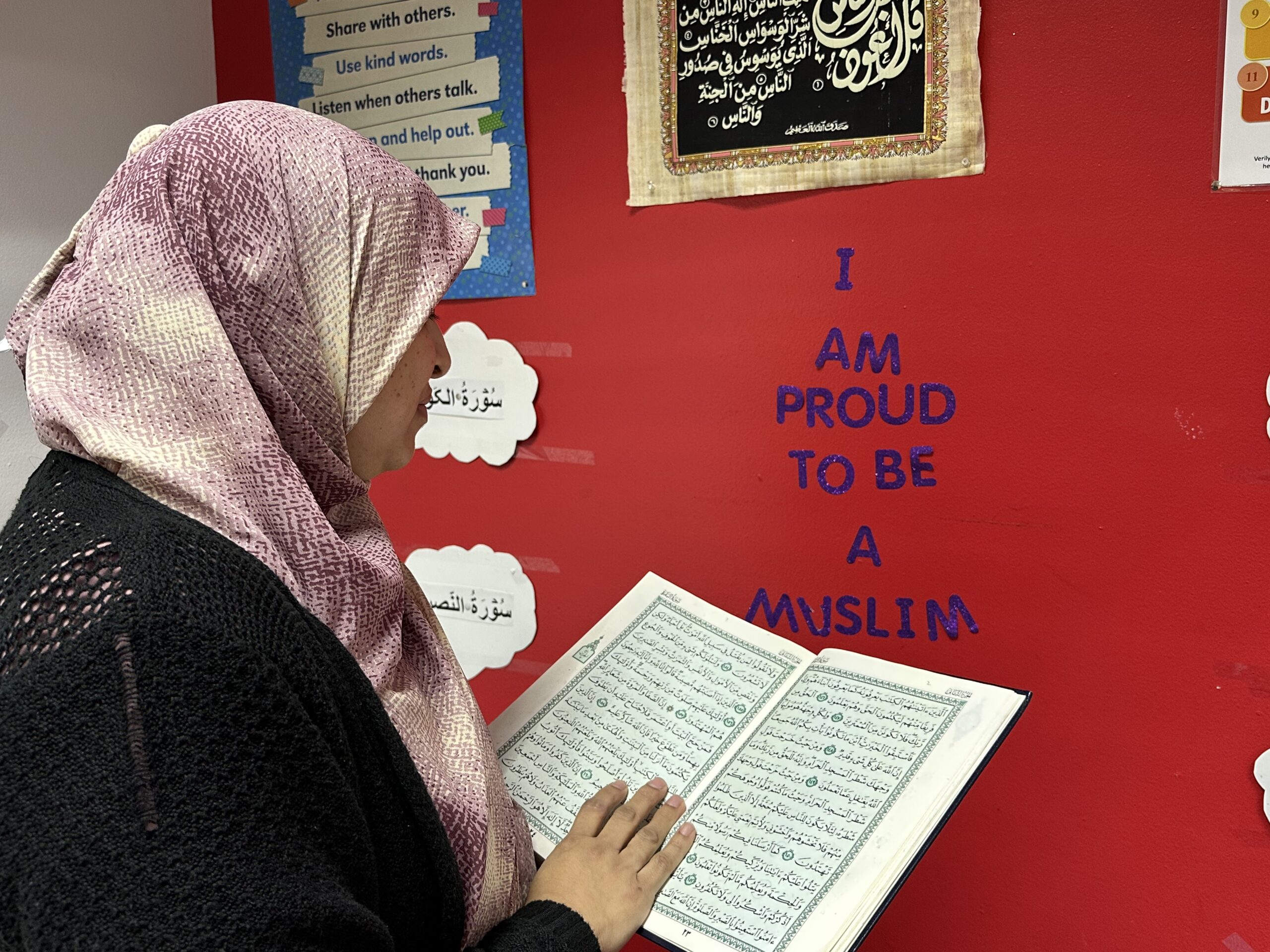 Tayyiba Ansari of Greenfield wants everyone to know “age is not an obstacle” and even women who are busy with work and family responsibilities can memorize the Qur’an.

Iqraa Qur’an School is based on the principle that “it is a duty upon every Muslim to learn and read the Qur’an correctly and recite it beautifully,” its website says. The school is “dedicated to teaching our students the correct way of reading the Qur’an.”

Classes are open to all ages 5 and up.

Facing the challenge with support

Like Shammout, Nour Thaher found herself in the company of supportive females, classmates and teachers—most of all her mother, she said.

Thaher remembers the first day, June 10, 2016. “From the moment I walked in, I knew I would love it.” That day she met her teachers, Sister Hanadi and Sister Shabna, and her new classmates, Niyama, Huda, Emaan and Nura. 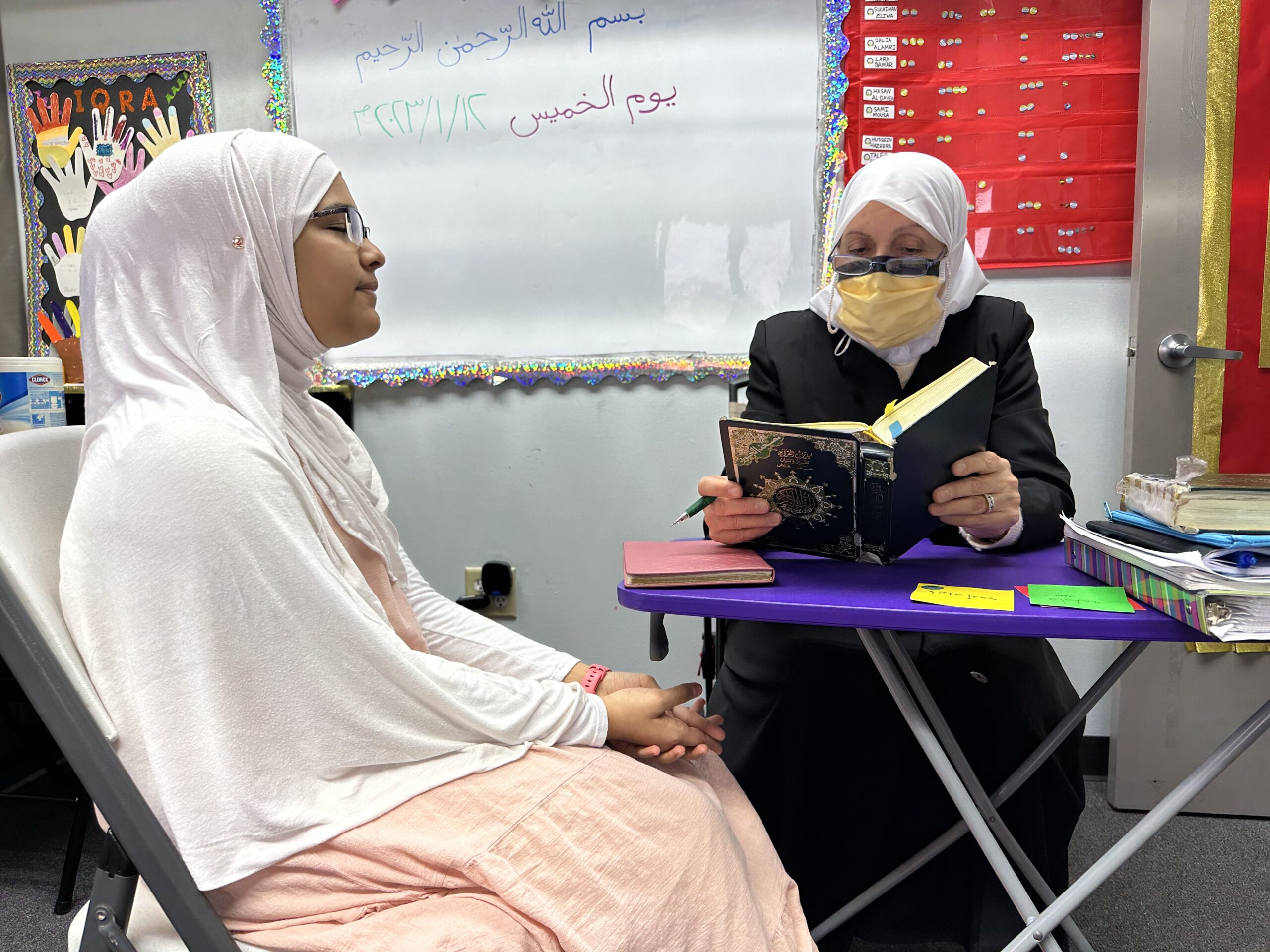 Hafidh teacher Ghada Mahmandar, a dentist from Syria, listens as a student recites the
Qur’an.

The teachers “made me feel like their daughters, not just one of their students,” she said. Her fellow students soon became fast friends.

“My mom was one of the best parts of the journey,” Thaher said. “If it wasn’t for all the time she put in, I wouldn’t have been successful.”

Thaher found it “very hard” at the beginning. Her goal was to memorize the Qur’an but she couldn’t even read it.

“She was like a baby learning to talk,” her mother Manal Hassan said. 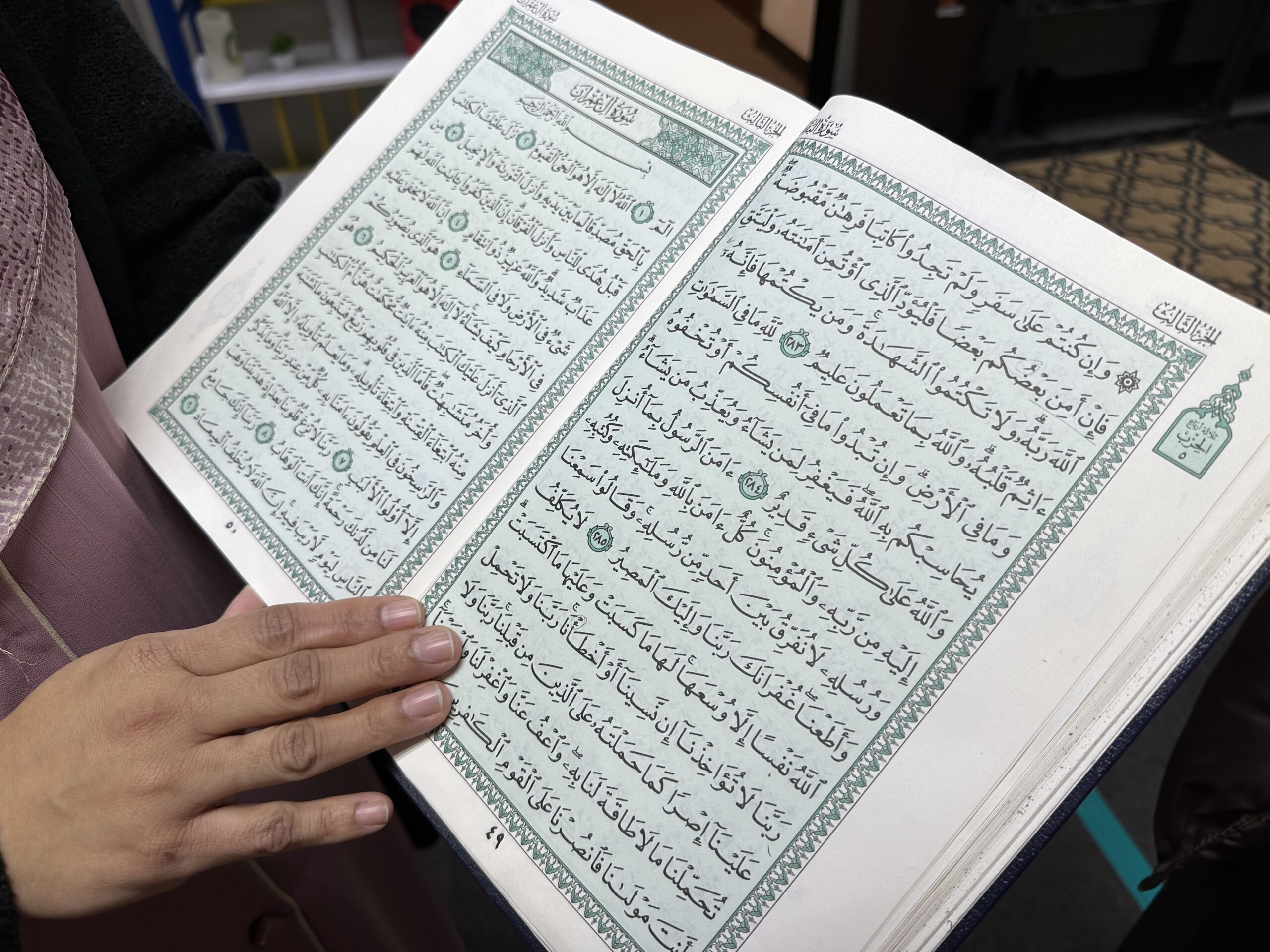 Thaher attended Iqraa Qur’an School from 9 a.m. to 2 p.m. daily, practicing memorization. The youngest in her class, her classmates helped her and her teachers guided her.

Thaher would bring her laptop in case she needed to sign in to a live class at public school, Hassan recalled. “This was before COVID and attending online was not common. Her school district was so helpful. Sometimes teachers would meet her somewhere in person.”

At home, Thaher would work on schoolwork. In the evening, she’d revise her verses for the next day as her mother sat listening to her recite. “I had to revise day and night,” she recalled. “Sometimes I would fall asleep while revising.

“Over time, I became really good at it,” Thaher admitted. She finished memorizing the whole Qur’an in November of her sixth-grade year. She joined her class in the public school but by March everyone went online because of the pandemic.

“Memorizing the whole Qur’an was a challenge but I loved this journey; it was so fun! It will always be the best years of my life.”

“It’s not just about memorizing,” Hassan added. “Allah will make everything easy in your life. I told Nour, sometimes you will have a problem and won’t know what to do. You’ll feel it is hard. Then, without doing anything, it passes and life is easy again.” 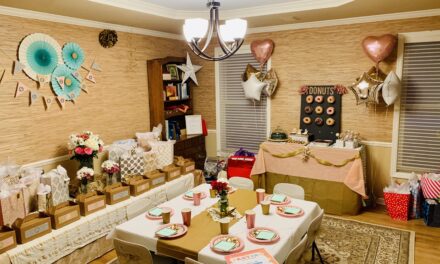 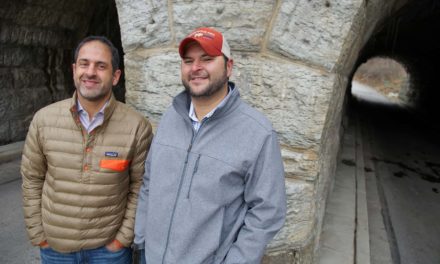 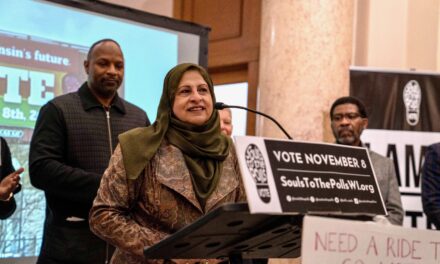