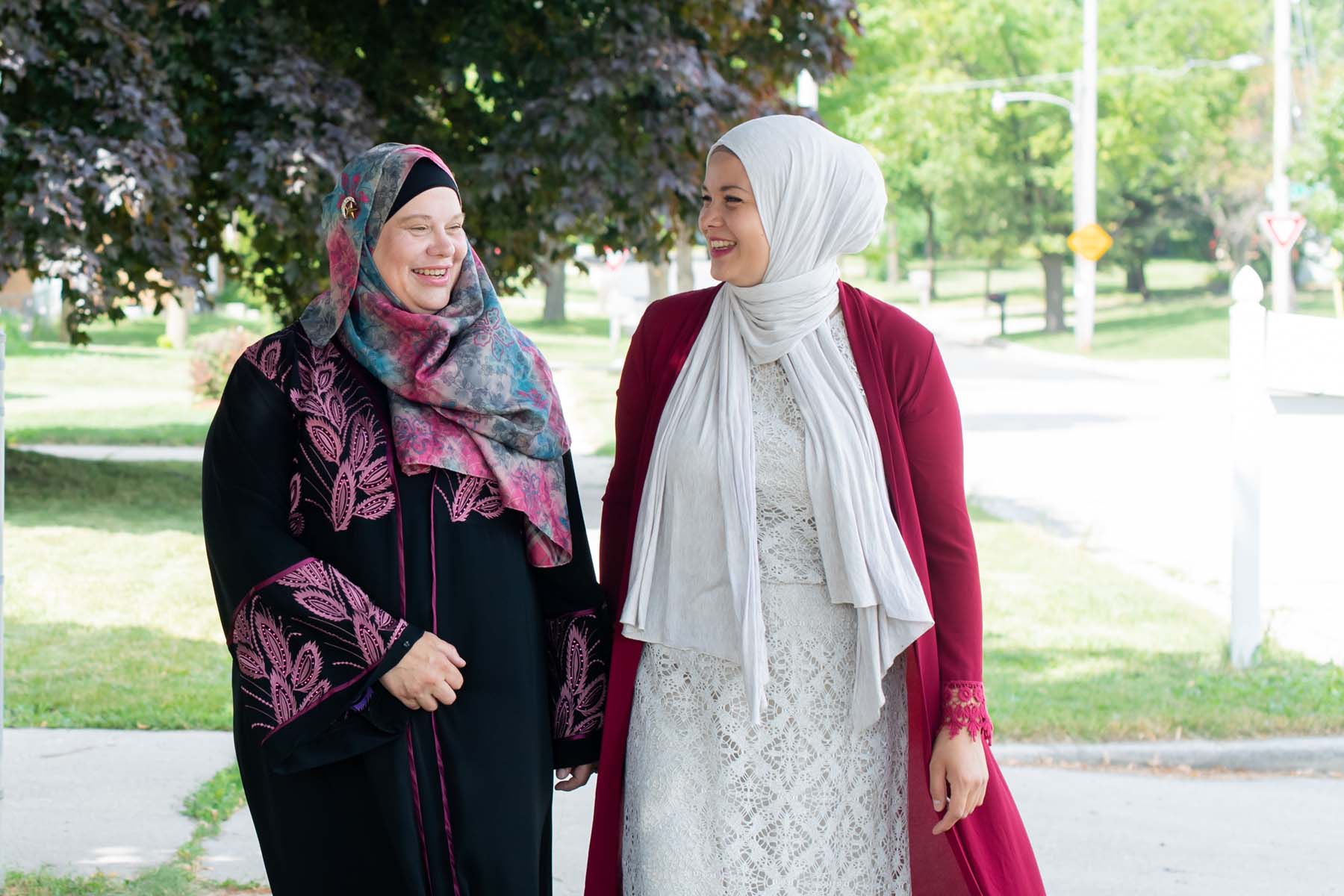 Marina Zouaghi and her family moved into their new home in Oak Creek only two days ago, yet the house is orderly and welcoming to a guest, with a platter of miniature cream puffs, grapes, and nuts on the coffee table. Her mother, Jill Ochoa, greets me as Marina comes from the kitchen with three glasses of Chinese gunpowder tea flavored with mint.

Marina’s 3-year-old son sits on a couch reading with his grandmother, while her 7-month old daughter Amel swings in a baby swing; the baby is quiet and content until a little attention from a guest has her clamoring for more.

We’re gathered to talk about the two women’s reasons, emotional, spiritual, and deeply personal, for becoming Muslims. Both Marina and her mother now wear hijab. Marina says of her first contact with a covered woman, “I was kind of afraid of it. I didn’t know what it was.”

Marina’s journey began about nine years ago, when, in her early 20s, she worked “doing a little bit of everything” – barista, waitress, delivery driver – for an Egyptian couple who owned a coffee shop called Sphinx and other businesses. It was Marina’s first encounter with Muslims. “I started working there during Ramadan,” Marina says, and “I kept trying to feed them.”

Marina asked her employers and co-workers why they fasted, and “everybody gave me a different reason.” Some of those reasons included understanding the feelings of people who don’t have enough to eat. And Marina, “being Christian at the time,” thought, “then I should be doing it too.” She began to fast as best she could. “One time I was delivery driving, and it was so hot and busy on the East Side. I bought a strawberry frappé and downed it, and then I continued fasting.”

She also “tried being modest, or what I thought was modest. I quit wearing nail polish for the month and wore a longer skirt.”

But an interesting thing happened. “At the end of the month, it felt good, and I got really interested in Islam and started studying it more.” 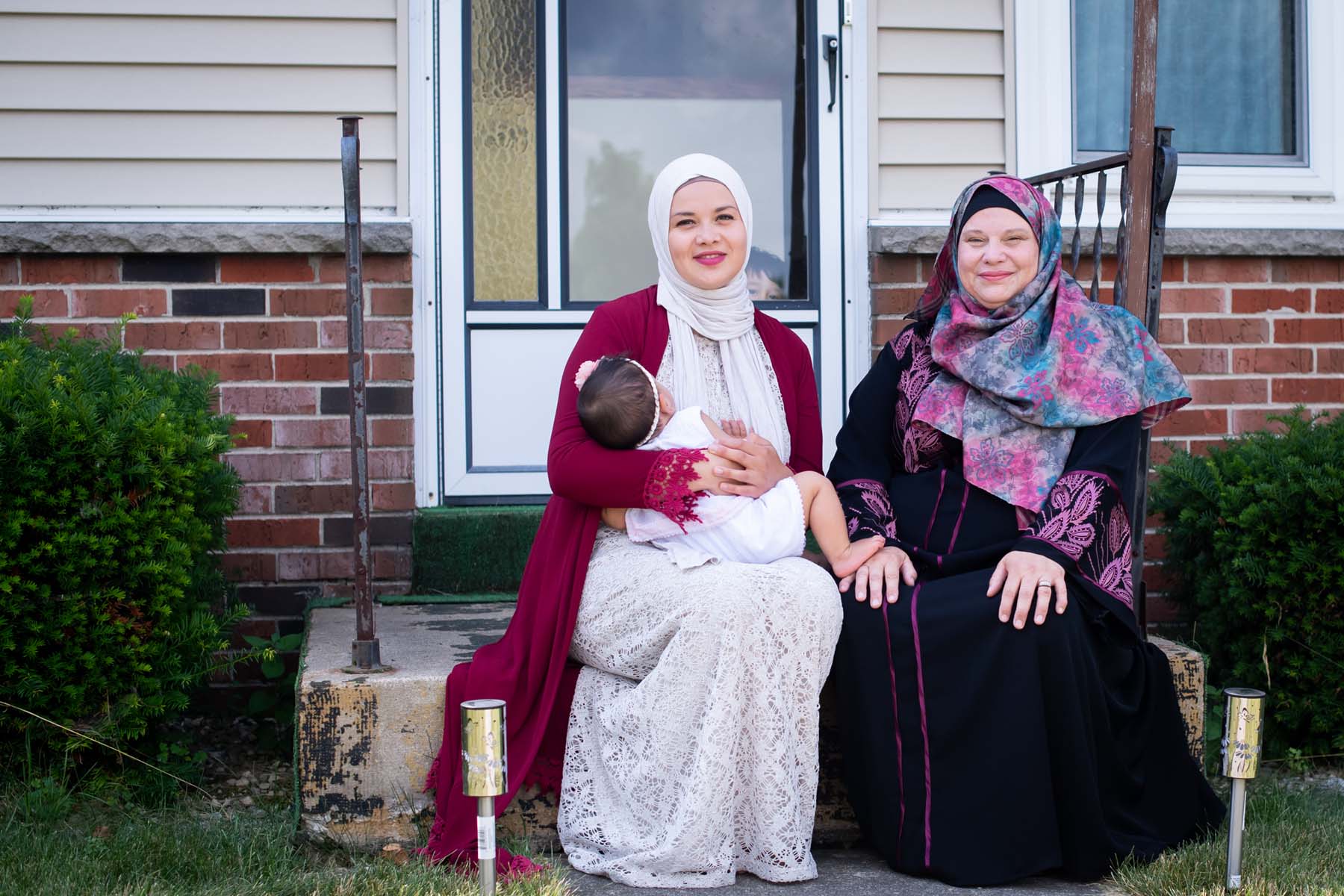 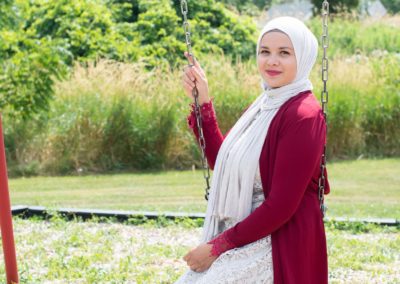 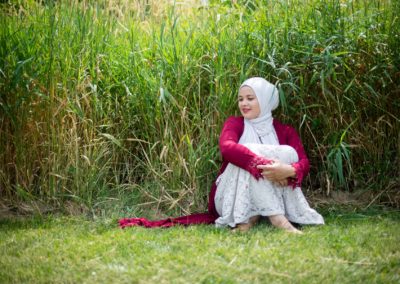 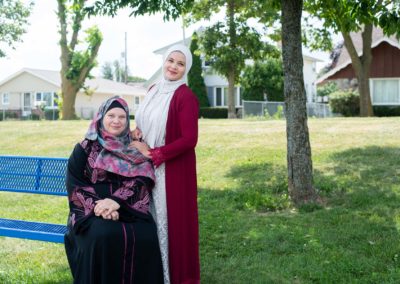 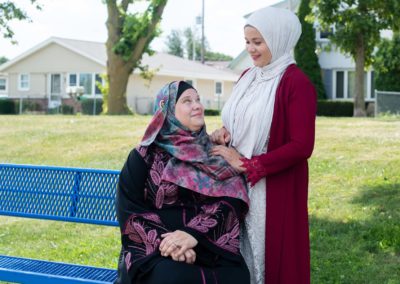 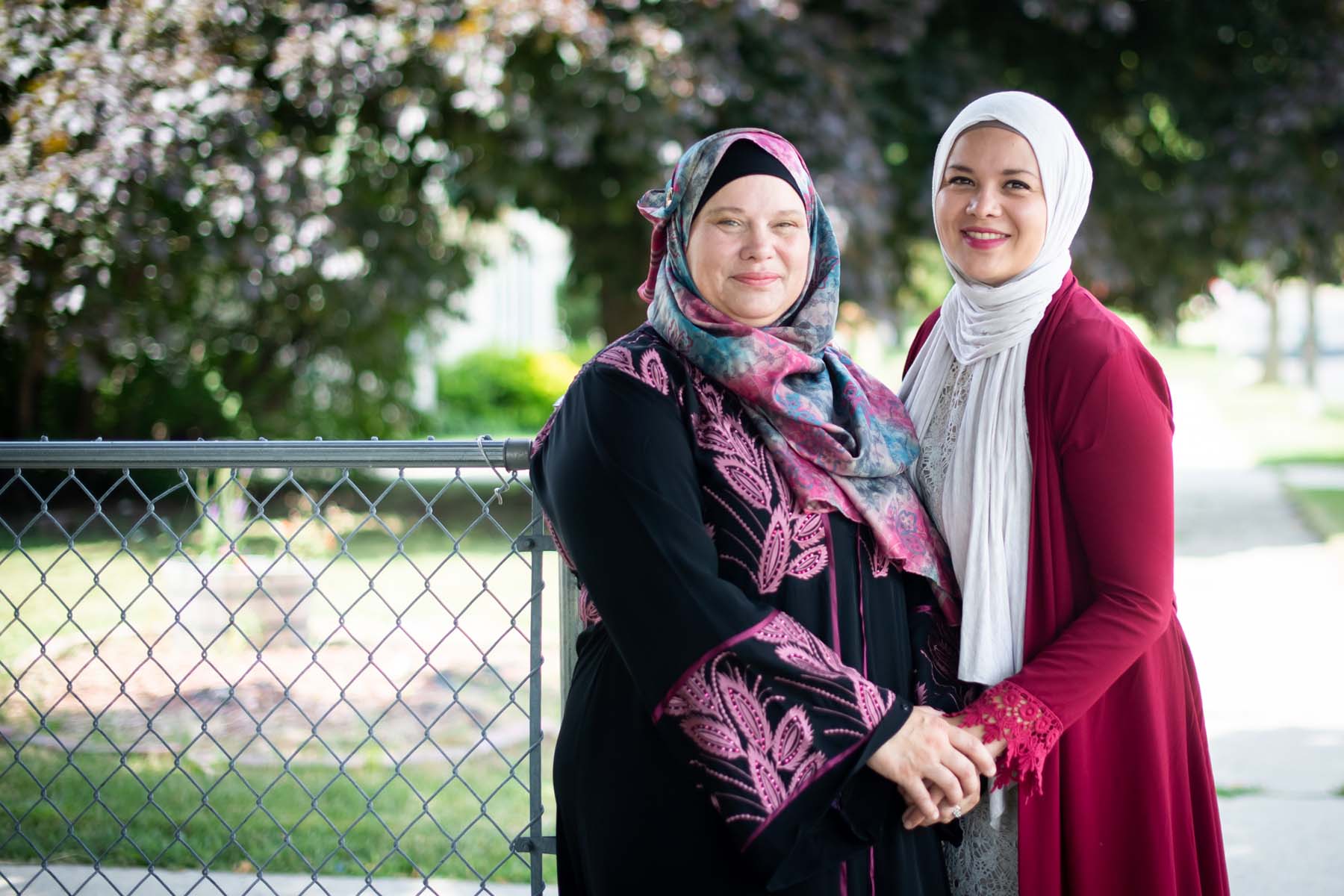 She joined the Muslim Student Association at Alverno College, where she was an international business student. There she met Sakina, who taught her the basics of how to pray. “She was really cool, very non-judgmental. I would show up to her apartment and she would teach me different things and answer my questions.”

One day, a friend called her at work. The friend concluded their conversation with the words, “Jesus is with you,” and Marina thought, “She means ‘God is with you.’” Her own response brought her up short. “I froze because I realized I had had a . . . change in my belief system. I was very nervous that my fundamental beliefs had changed.” Muslims believe that only God is Divine, Jesus, Muhammad, Moses and others are viewed as great prophets.

However, the end result was, “I decided that I wanted to become Muslim.” Now, when she saw women wearing hijab, “my fear had turned to envy.” Jill bought Marina her first modest outfit, a maxi dress from Target, and Marina “felt like a queen on the East side.” When she decided to begin wearing a headscarf, she “watched a lot of YouTube videos. If you want to learn how to wrap a hijab, it’s on YouTube.”

On June 29, 2012, Imam Ziad at ISM said the words, “There is no God but Allah and Mohammed is his final messenger,” this is the Muslim testimony of faith.  Marina repeated them, “and that made me a Muslim. Then we all went out to eat.”

She has never looked back. Becoming Muslim “changed things – health, finances, self-respect, outlook.” And all the changes were positive. “I felt really restless before – that subsided when I became Muslim. I was much calmer.” Her mother agrees. “Me and her dad [saw] that she was happier, wasn’t as stressed.”

Less than a month after her shahada, Marina married Messaoud Zouaghi, who had come to Milwaukee from Algeria to study at UWM. Most of the wedding guests had never been to a mosque.

Marina met her in-laws for the first time on Skype, but she and her husband subsequently traveled to visit them in Algeria. Jill and Messaoud’s mother Noucha now talk regularly. “I was so worried about Marina traveling abroad,” Jill says. But Noucha told her, “My son is now your son and your daughter is my daughter.” Today, Jill says, “I don’t worry about her when she’s with them. I know they will take care of her.”

A Mother Follows in her Daughter’s Footsteps

Jill Ochoa was baptized a Catholic. In her 30s, she became an Evangelical Lutheran. In 2009, she was diagnosed with Crohn’s disease, an autoimmune disease of the digestive system, a condition that is aggravated by stress. “I had gotten to the point with Christianity where I kept having questions about my faith and never got the answers I wanted. . . It was always that I didn’t have enough faith. The sicker I got, the angrier I became.”

Though she approved of the changes in her daughter since her conversion, she didn’t necessarily understand the reason for those changes at first. One night, “I was digging through the Bible,” Marina says, and finding passages that supported her Muslim faith. “I was crying and it shocked [my mother] and she got overwhelmed.” Jill told her daughter, “I’m never becoming a Muslim, I just want to understand you better.”

But Jill got an email from a friend to attend an interfaith panel at MSOE, “and I said okay, and that was the day I decided I wanted to be a Muslim.”

On the panel were an imam, a priest, a rabbi, and a Christian pastor. Jill asked, “If someone does something horrific to a child, and they ask for forgiveness before they die, do they still go to heaven?” The priest and pastor both said yes. The rabbi said, “We’re not quite sure what happens.”

But the imam said: “We think of this world like a scale. Not every deed weighs the same. When you go before God, you want to have more good deeds than bad deeds. You don’t just say you’re sorry. Sometimes you have to answer for them.”

Jill went down to the lakefront early one morning and sat at the end of a pier. “I put my head on the ground and prayed and felt this overwhelming hit of peace and strength. I felt someone was there with me, and I wasn’t alone.”

When she told her husband she wanted to become a Muslim for her birthday, he said, “So, no present?”

But Islam was her present. Jill was 47 at the time of her conversion, when she too began wearing hijab. At a family picnic on a warm summer day, people kept asking her, “Aren’t you hot? Aren’t you hot?” But they also noticed something else. “I started getting some respect and some strength that I didn’t have before,” Jill says.

To date, two more of Jill’s daughters have converted to Islam, Jade, who became Muslim 3 years ago, and Melissa, who became Muslim on the 27th day of Ramadan this year, before her marriage to Jorge Vazquez, who attended her shahada. One daughter, Mariah, remains Christian. 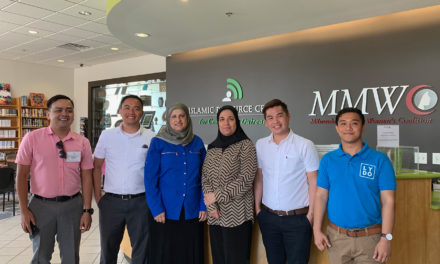 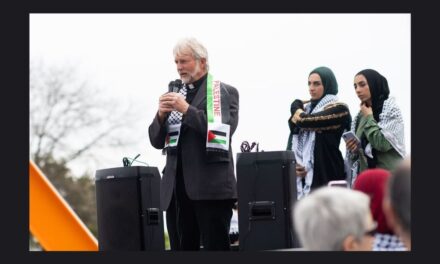