Why Wisconsin’s Muslims should vote – the real reason 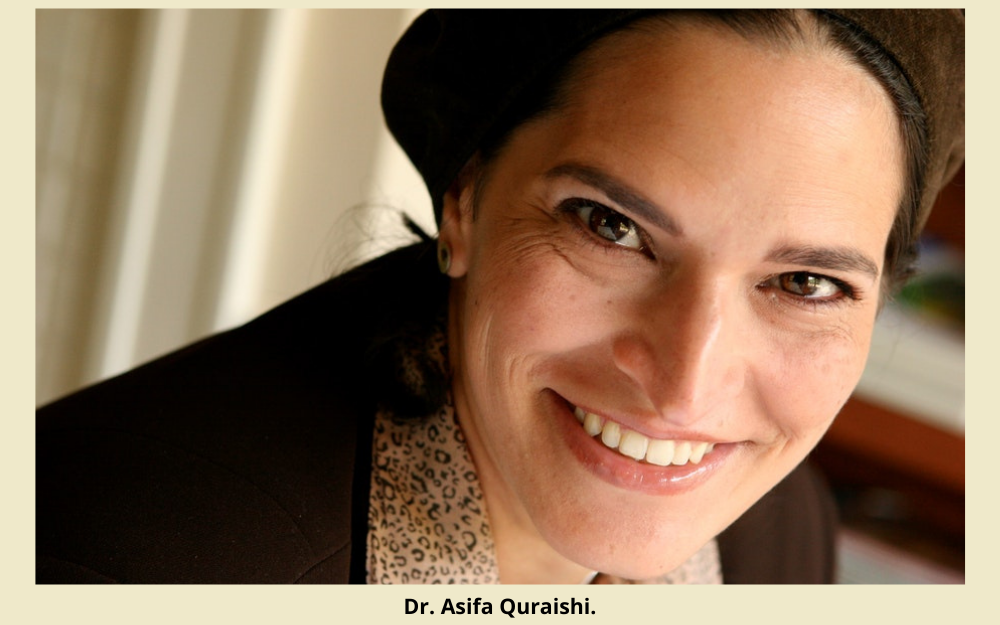 If you are Muslim, you should vote but maybe not for the reasons you think, said University of Wisconsin Law School Professor Asifa Quraishi.

Dr. Quraishi, a 2009 Carnegie Scholar and 2012 Guggenheim Fellow who specializes in comparative Islamic and U.S. constitutional law, served as the featured speaker Tuesday in “The Importance of the Muslim Vote,” a program organized by UW-Madison’s Muslim Student Association (MSA) and the Middle Eastern Law Students’ Association (MELSA).

“You have been given this incredible tool (the right to vote) by living in a democracy,” she said. “Whatever you think is unjust in our system, whatever is causing harm, the way we change it is to vote.

“You’re going to have to answer to God someday. What will you say you did with this opportunity?”

UW-Madison’s MSA and MELSA organized Tuesday’s event “because this election is very important to Muslims,” said MSA events coordinator Yaseen Najeeb, a political science senior. “There are so many things President Donald Trump has said that have caused many problems for Muslims, and not only Muslims. We have to push as hard as possible (to elect Joe Biden) because the alternative is quite terrible.”

More than 30 participants stayed on the Zoom call for about two hours, well beyond the allotted time, to ask questions of Quraishi and other speakers who talked about the hows and whys of voting in the 2020 November election

How you vote matters

Many Muslim voters are not satisfied with the candidates for president, noted law student Sarah Ghazi, co-president of MELSA, in a question to Dr. Quraishi.

“One candidate, I think it is fair to say, deplores the existence of Muslims. He passed multiple Muslim travel bans, made it very difficult for us to see our family members and has invoked a great deal of Islamophobia in our country. On the other hand, you have another candidate you don’t really expect to do much for our community. So, how do we motivate our family members, friends and peers to vote?” Ghazi asked.

“I don’t think it helps Muslims to think only about ourselves,” Professor Quraishi replied. “The Muslim ban is horrible and so are a lot of other things. 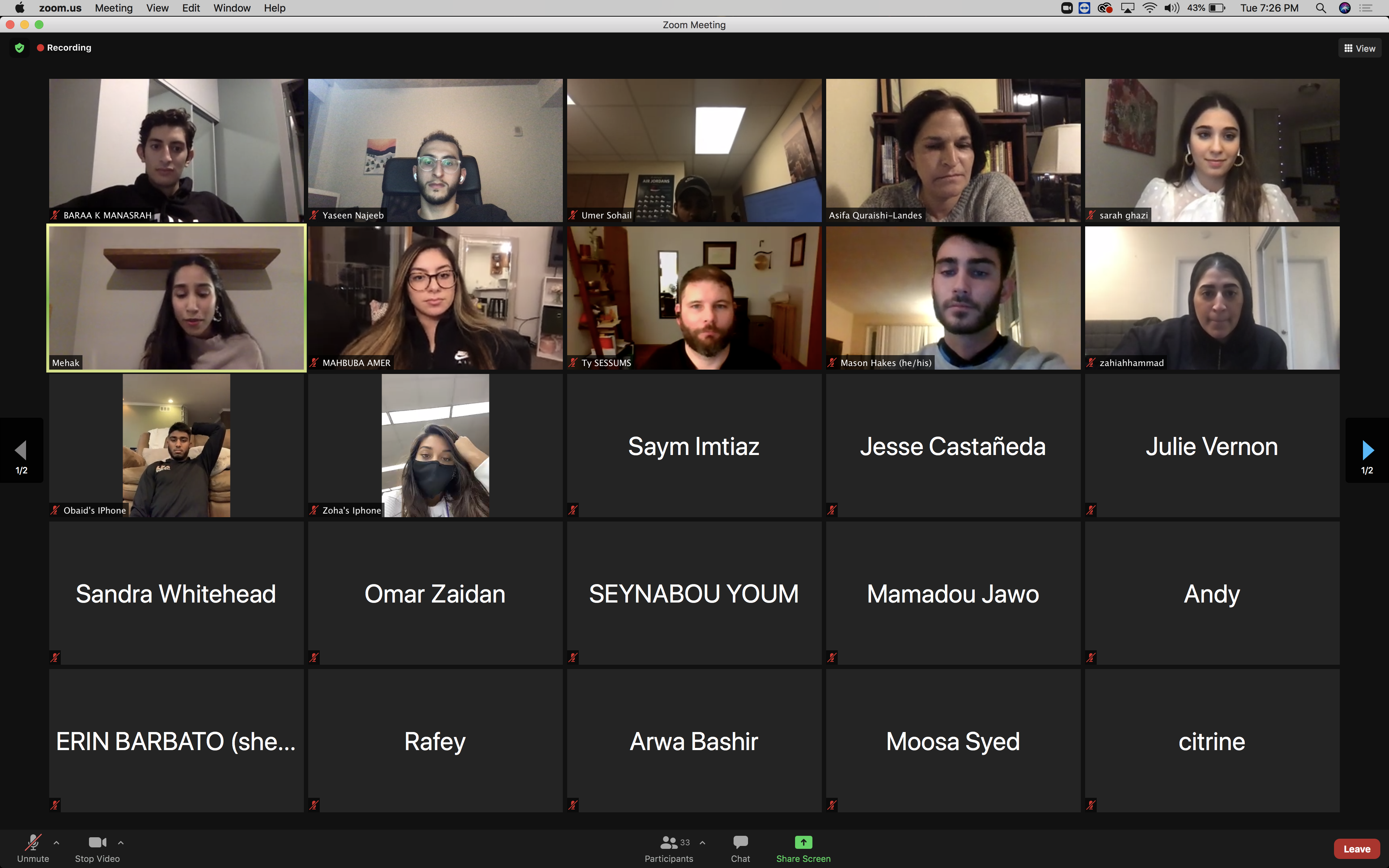 “The way Trump has operated, he has created a coalition without realizing it, of all the groups he has alienated,” she continued. “Starting with the horrible things he said about Mexicans and the Chinese, to not just dog whistling, but direct bull horning white supremacy.

“Is it right to take children away from their parents just because they came across the border for a new life? It has nothing to do with the Muslim ban. We need to do something, anything, to get somebody in power to change that.

Voting “is not a Venn diagram where everybody’s self-interest overlap and that is what we vote for. We are supposed to be collectively deciding the good of all, not a tribalism of protecting my own.”

Shari’a is not the boogey man

“What often happens when Muslims are in the public sphere is that there is this freak out among the Americans,” Quraishi said. “People are afraid we are going to bring laws from somewhere else and push them on Americans. Several states have enacted anti-Shari’a legislation.

“Shari’a has become a boogey man and I think that is really sad,” she said. “Shari’a is lifting people up and helping the hungry and protecting the environment and responding to health crises—all those wonderful things. I think we should move to a place where we understand that.”

“Even in the American Muslim self-narrative, we are afraid to use the word Shari’a. We say, ‘As my private Muslim beliefs or maybe the Quran tells me.’

Americans fear “creeping Shari’a” and ask Muslims about it. “The answers we give aren’t helping,” Quraishi said. She has seen two main responses.

“Many Muslims say, ‘Look, Shari’a is just for my private life. That makes me feel like Islam is a bad thing, something to hide. It is saying Islam doesn’t have anything positive to add to society.”

The other answer Quraishi hears goes something like this: “‘There are new interpretations that are compatible with American law. And that is the Shari’a that I follow.’” 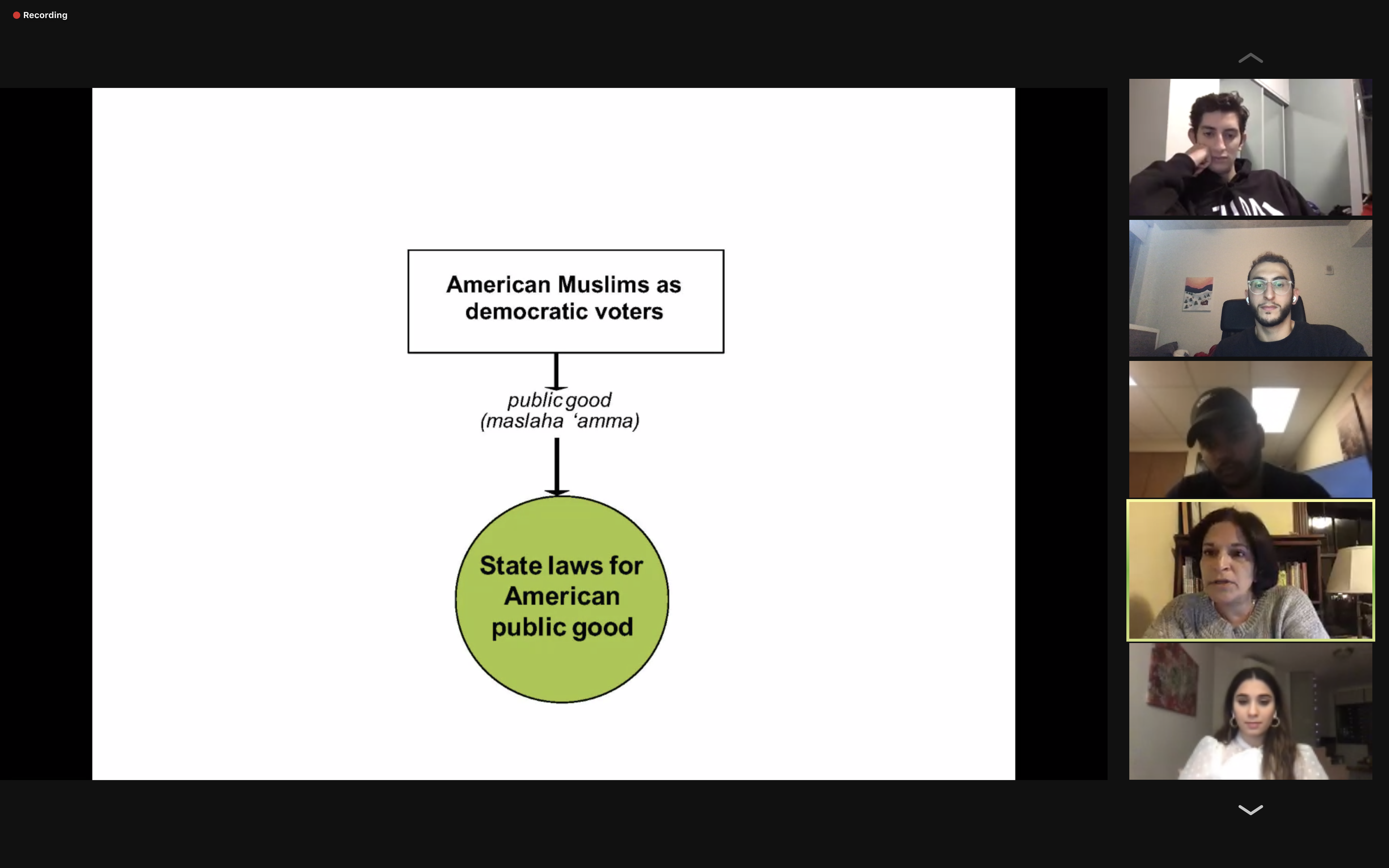 That response will only take you so far, she said. “There are some nice commonalities with American law, like innocent until proven guilty and the exclusionary rule, that you can’t invade someone’s privacy to gather evidence against them. But you can’t escape the fact that there really are some fundamental differences between Islamic law and American law. Islamic law really does give men more rights in marriage and divorce than it gives women. Same with child custody and with inheritance.

“At that point, you have to do some major remodeling to make it compatible and I don’t think that is very realistic,” she said. And even if it could be done, “I don’t think Muslims are going to agree with the new interpretations.

“I say there is a better way and it involves a basic understanding of Shari’a that I think people don’t appreciate—Muslims and non-Muslims alike. So, I’m going to give you a little Shari’a 101.

Shari’a in Arabic means “path” or “way.” The rules you are familiar with—how to pray, how to marry, how to leave your money to someone after you die—are only part of the story. Shari’a law is of two types: Fiqh and Siyasa.

Fiqh starts with the Quran and the Sunnah (the prophetic example) and goes through Ijtihad, legal interpretation by Islamic scholars who extrapolate rules about how to live from them original sources, resulting in diverse interpretations. “We as Muslims can pick the one we want to follow,” Quraishi said. It is not enforced by the state.

State law, Siyasa, is not based on scriptural interpretation; it comes out of an evaluation of what is in the public good,” she said. “These are the rules that are important for society to function.

“In pre-colonial times, a king, emperor, sultan or caliph made all kinds of laws that served the public good. They did things like raise armies to protect the society. They built roads and bridges. They made rules to oversee the marketplace to make sure the weights and measures being used weren’t cheating people.

“Fiqh is about individual’s living their lives. Siyasa is about the ruler’s work in serving the public good. These are two separate kinds of law operated by separate groups of people,” she said. In Islamic states in pre-colonial times, “we did not have a church-state problem with the people telling us what God says being the same people who actually have the police power to put you in jail.”

“We have this weird idea that an Islamic government is a government that legislates Figh rules,” said Quraishi. “That all the rules of individual Muslim behavior should be forced on everyone by the ruler. That is not how it worked. State law was not a reflection of the Fiqh law.” 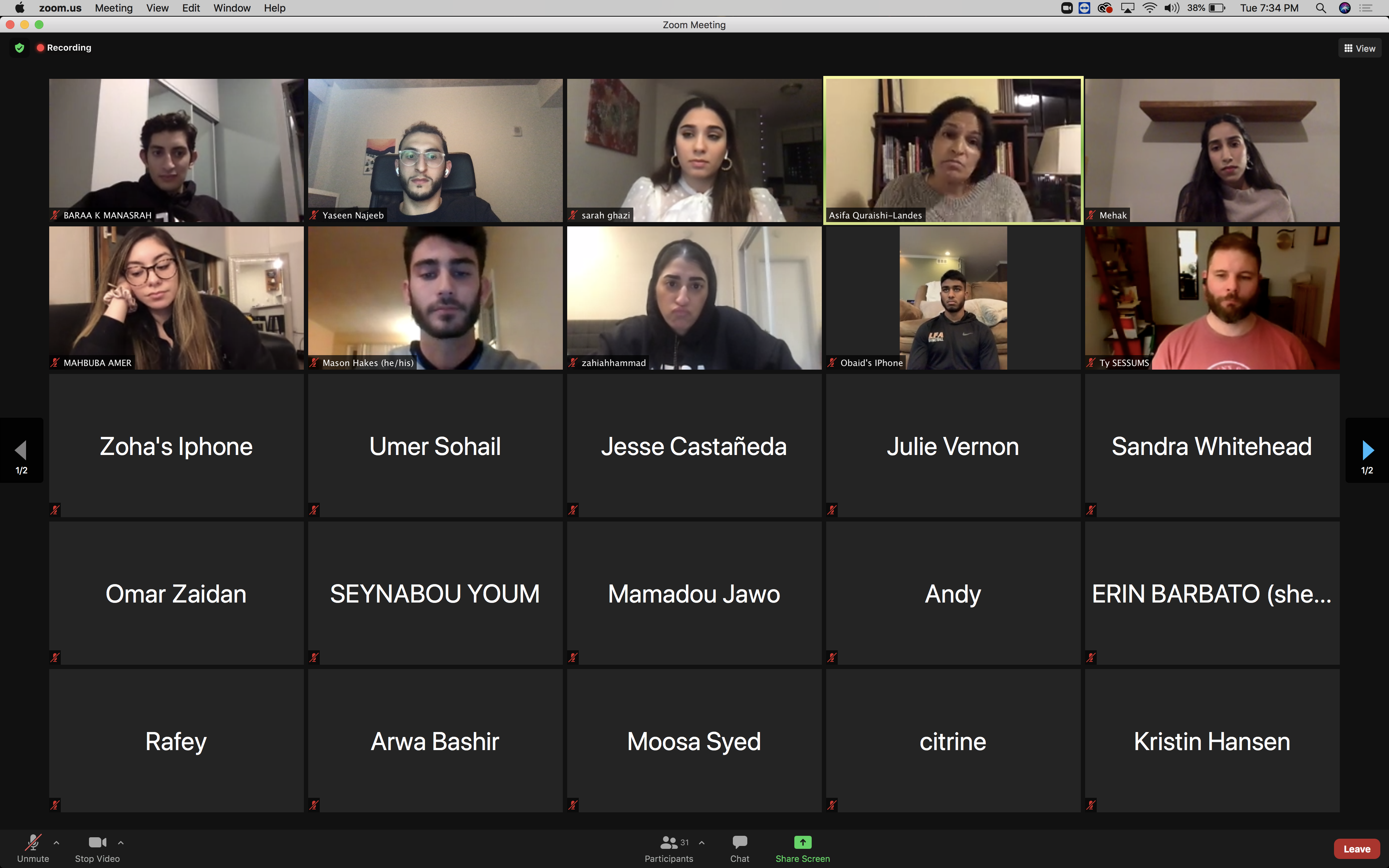 That misconception is a result of colonialism, she said. Thinking about law from a Western, nation-state perspective, law is something the state does. If rules or principles come from any other entity, we don’t think of them as laws. We think of them as morals or ethics or religion, but not law.”

The first responsibility of a Muslim ruler, according to Shari’a scholars, is to serve the public good. In a democracy, voters assume the duty of the ruler, noted Quraishi. “Then my job as a Muslim voter is to ask, ‘What is in the American public good?  It is a very different question than how am I going to live my life as a Muslim.”

Quraishi said she is often asked by Muslims if they should vote for things that are against Islamic practice, things Muslims shouldn’t do. For example, “if I believe marijuana is haram, should I vote for the legalization of marijuana?

“You have to ask what is best for all,” she said. You would need to consider all the racial discrimination that happens with the prosecution of marijuana crimes and ask if it would be better to make it legal to take those problems away. “That is a very different question than asking if a Muslim should smoke weed.”

In many pre-colonial Muslim societies, the ruler stood behind decisions from religious communities that had rules in their personal lives that were different than Muslims would have in their own lives. You want a society where everyone is living in harmony, not where they feel they are being dominated and oppressed by their rulers. A lot of things may be allowed at the state level that an individual Muslim would never do.

Citing a 2017 Pew Poll, Quraishi noted that most American Muslims think working for justice and protecting the environment is part of what it means to be a Muslim. “We have been at the forefront of the water crisis in Flint. And we have built free health clinics in inner cities. We have been raising funds to respond to COVID. Way before 9/11, Muslim Americans have been doing things for the public good.

“What I would love to see is when I think about Shari’a in the United States are people like Malcom X and Mohammad Ali who spoke over and over, and over again for justice.”

Our duty to vote should be carried out with a sense of duty to the public. “If you are voting only to benefit yourself, to lower your taxes, for example, you are like the ruler who is doing things only in their own or their chronies’ self-interest.”

American Muslims can show the rest of the world how to participate in democracy with the public good in mind, Quraishi said. “My responsibility as a Muslim voter is ask, “What’s good for the country?” If that is what we are known for, then Muslims are going to be respected by everybody.”

UW graduate Zahiah Hammad spoke on behalf of the Movement Voter Project, which mobilizes on university campuses to motivate students to vote.

“My first time voting in any election was the 2016 election” Hammad recalled. “I remember going confidently into that thinking that President Trump was not going to win. By the end of the night, he did win and that was really devastating.”

After the election, she saw America become more threatening and less friendly to Muslims and other marginalized groups. “I started seeing people being outwardly racist. I realized that I had not checked on family and friends and encouraged them to vote in 2016 and that year Wisconsin had the lowest voter turnout in 20 years. It showed me how important every one of our votes is. I think that has really shaped why I do the work I do right now.” 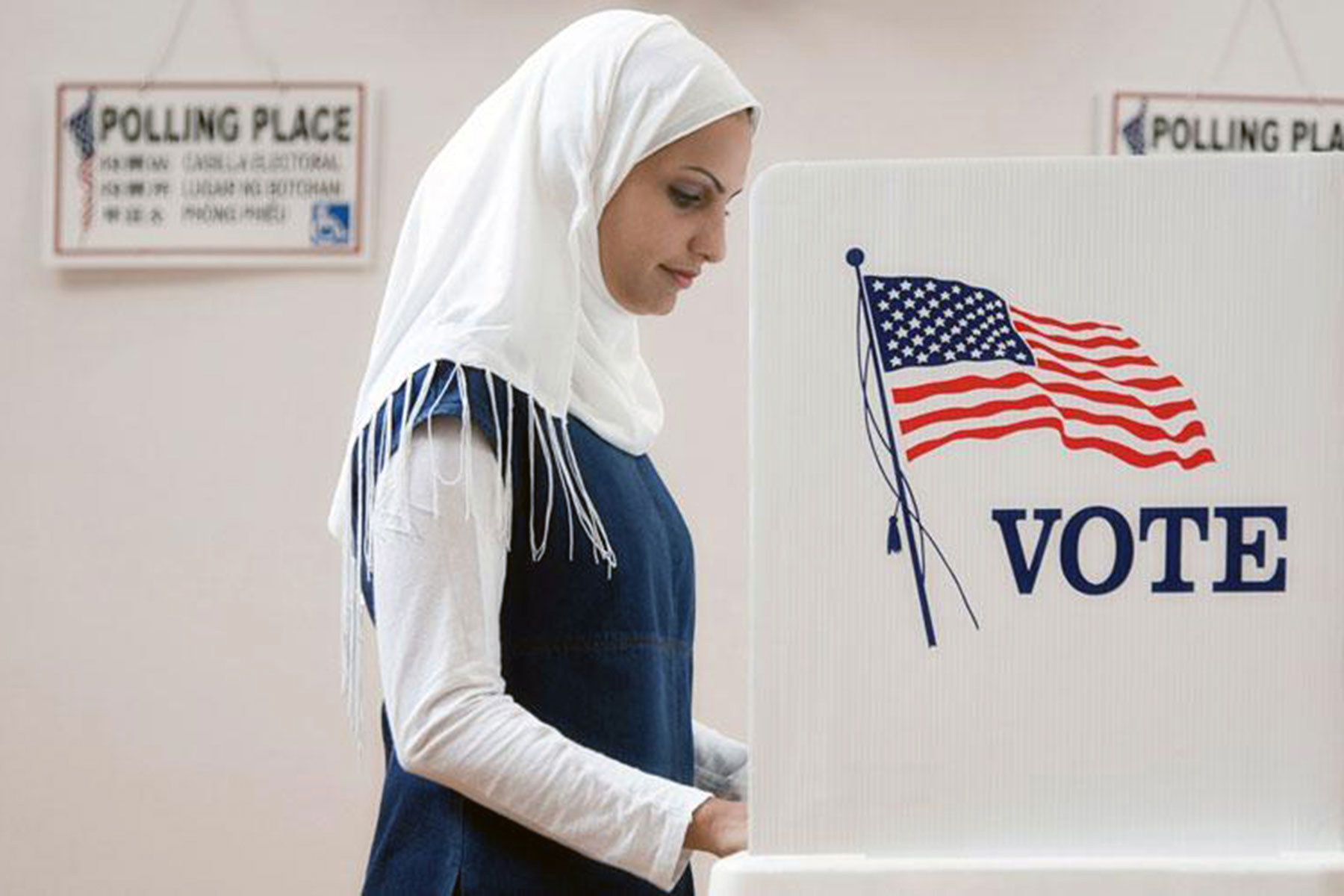 Hansen encouraged everyone to engage with the WMCA. She is a life-long activist and was the development director for the ACLU for many years before going into private consulting. She is also the founder of Blue Sky, a progressive political association in Waukesha.

As the first executive director of WMCA, she helped raise funds to hire five staff members. Hansen is currently working to identify Muslim voters in Wisconsin and marking them in the Voter Activation Network, known as the Van.

“We know there are a lot of Muslim voters out there, but we can’t prove it, yet,” she said. “When we can, politicians will have to listen to us. We are here to build political power, and to share information about voting and voting rights,” she said.

“Democracy, use it or lose it. Let’s do this, people!” 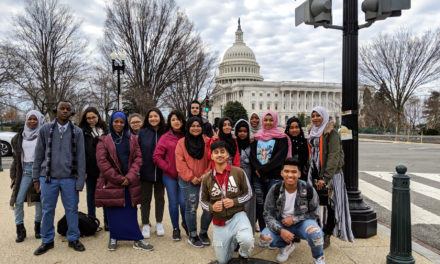 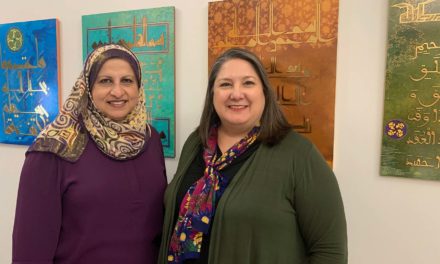 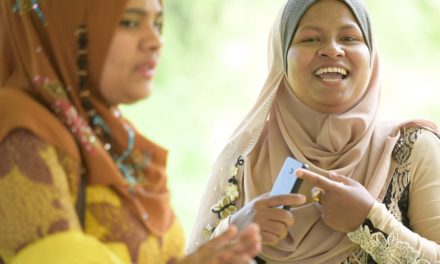 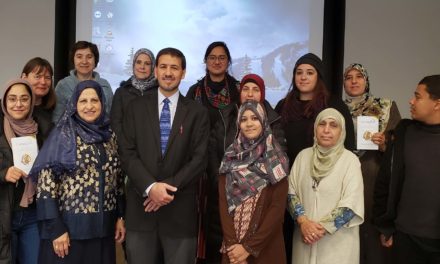