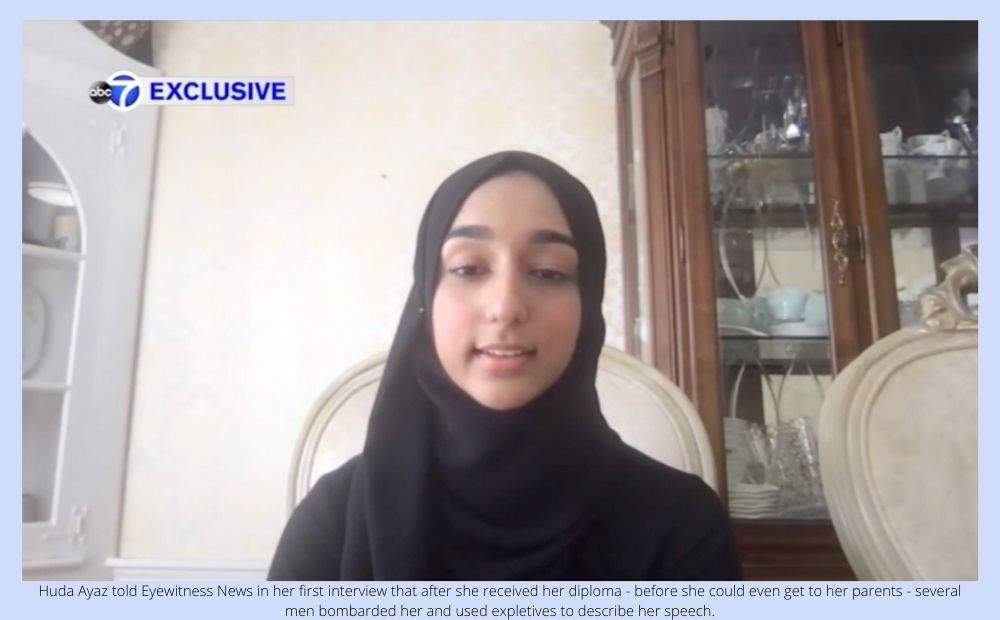 Huda Ayaz told students during her speech on Sunday at The Wheatley School in the East Williston School District, “Educate yourselves about international dilemmas including the ethnic cleansing of Palestinians and Uighur Muslims. Families are continuously torn apart and real human lives are being lost, but ignored.”

Some viewers who contacted Eyewitness News over social media say “ethnic cleansing” is considered an attack on Israel and people of the Jewish faith.

Ayaz told Eyewitness News in her first interview that after she received her diploma – before she could even get to her parents – several men bombarded her and used expletives to describe her speech.

“One of the parents told her to go back to Pakistan,” said Ahmed Mohamed with the New York chapter of the Council on American-Islamic Relations.

Eyewitness News observed cell phone video which shows Ayaz going up to the podium and the man who appeared to be holding the phone saying to her, “Why didn’t you say anything about Hamas?”

Mohamed and Ayaz said one man had to be escorted off of the property for harassing Huda.

Ayaz showed Eyewitness News the email exchange she had with high school principal Sean Feeney the day before the graduation in which she sent Feeney the final version of her speech.

Feeney said in a statement to Eyewitness News, “I was not informed that the speech had been edited by the student after it had been selected and approved by the Wheatley Speech Selection Committee. As such, while I did read the approved speech, I did not read the final speech before it was presented.”

Ayaz said the speech committee told her she was allowed to make changes to the speech after it was approved.

Ayaz said as she was practicing reading the speech at home she felt she should add a part about Palestinians and Muslims, as the theme of her speech was about speaking up.

“My main purpose was just to raise awareness,” she said.

She said when she went to the podium on Sunday, the school had printed the version of the speech she had emailed to Feeney on Saturday, which included the two sentences about Palestine and Muslims.

“A high school graduation ceremony, solely intended to acknowledge and celebrate the milestone achievements of the graduating class, was not the appropriate venue to express any political statements,” Feeney said in a statement to Eyewitness News.

In an email to families, just hours after the graduation, Feeney said Ayaz diverted from the remarks that had been originally approved by the speech committee.

“I want to be clear that the injection of such remarks was absolutely inappropriate to the graduation ceremony,” he wrote. ” I apologize that such a wonderful ceremony became marred for many people in attendance due to those remarks.”

Feeney also said in his statement to Eyewitness News, “As adults who are role models for our children, it is equally important that our actions toward others, including those with whom we disagree and especially the youngest members of our community, must always be respectful and reflect the beliefs that are the hallmark of our schools and our community.”

“As a place of learning, our school district encourages diversity of thought and opinion but always within appropriate venues that are structured to ensure all voices can be heard,” she wrote. “That did not take place today.”

Kanas said she and Feeney are discussing the necessary steps to prevent such an upsetting occurrence from ever happening again.

“We will be in discussion throughout the school district, K-12, to ensure that our message of respect and appropriateness is effectively being communicated to our students,” she wrote.

“We’re just constantly looking over our shoulders, worried about what’s going to happen,” she said.

Mohamed called the school’s and the school district’s reaction shameful and disgusting.

“They created a target on her back,” he said. “And the parents took advantage of that.”

Mohamed said they are doing a letter campaign to the school in support of Ayaz. 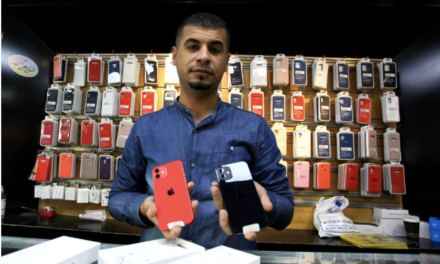