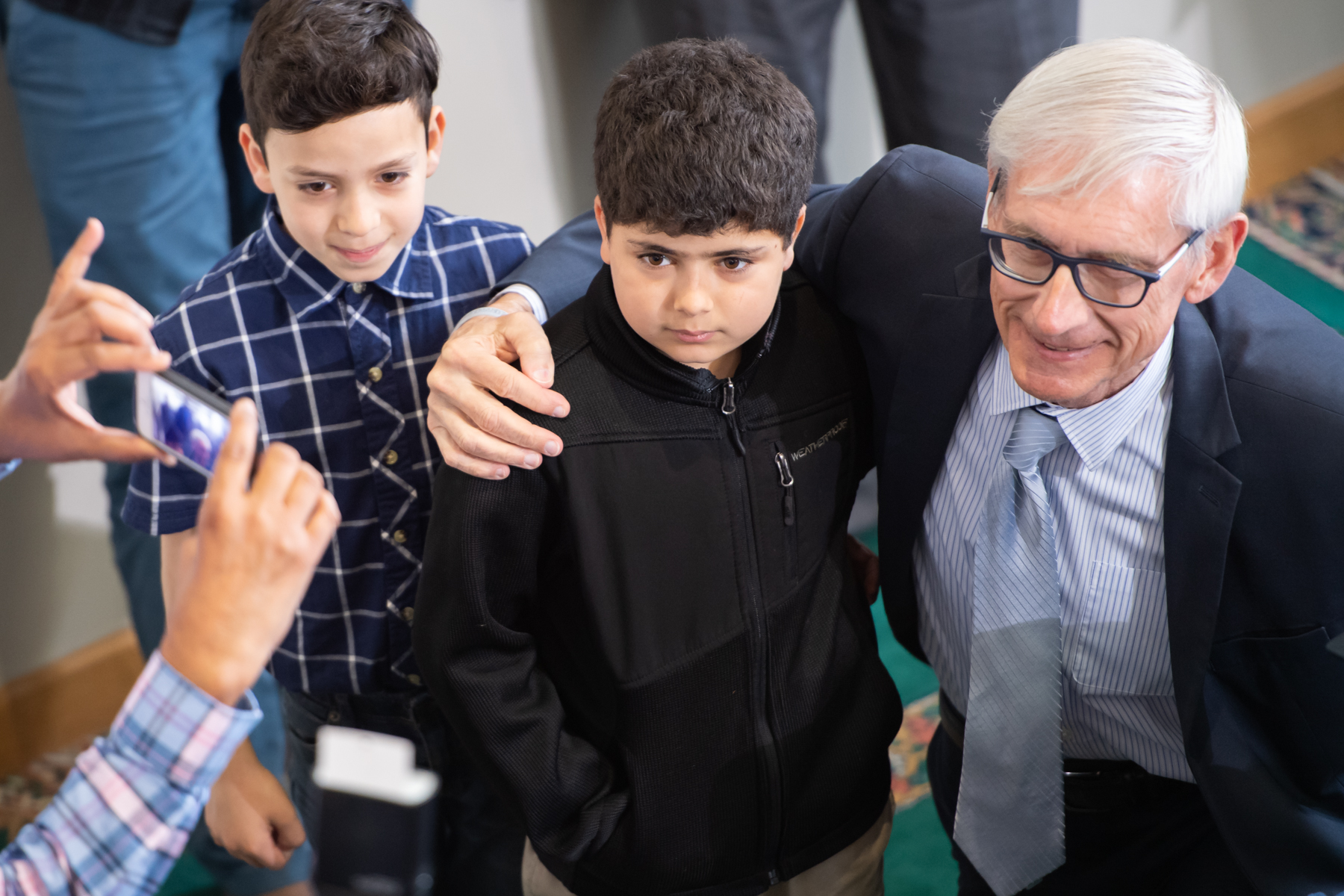 When Imam Dr. Zulfiqar Shah gave the sermon following the regular Friday afternoon prayer service at Islamic Society of Milwaukee last week, you could sense the excitement in the room. Sitting in front of the Imam was Wisconsin Governor Tony Evers.

Evers’ drop-in visit was not widely publicized prior to last Friday. Only the congregation’s leadership was aware that the governor would be paying a visit, said Othman Atta, ISM operations manager. Evers was not there to raise money or to campaign, but to pay his respects to the Muslim community during the holy month of Ramadan. His next run for governor will be in 2022.

Mr. Atta introduced Evers by referring to the contrast between him and former Governor Scott Walker, who said while campaigning for president in 2015 that there are “a handful of reasonable and moderate followers of Islam.” His statement carried the implication that most Muslims are Islamic radicals.

“Which is really the most offensive thing that anyone can say,” Mr. Atta said, adding, “but then we heard even more offensive things from other candidates.” Walker subsequently refused to retract his statement.

“We need to know who are the people who really value pluralism here in the United States,” Mr. Atta continued, “who value all people of all the different backgrounds, and it is our true honor and pleasure to have Governor Tony Evers.”

Evers began his brief talk by recalling a visit he made to the small northwestern Wisconsin town of Barron. “Just like any other rural community, it has a number of signs, pointing you to downtown, City Hall, the Public Library.” In Barron, they also “have a sign pointing you to City Hall, the Public Library, and the Islamic Center. Think about that,” said the Governor. “What can happen in Barron,” a town of only about 2,000 people, “can happen anyplace else in the State of Wisconsin.”

As Governor Evers pointed out, the Muslim residents of Barron, which is near the Minnesota border, are members of the Somali community. 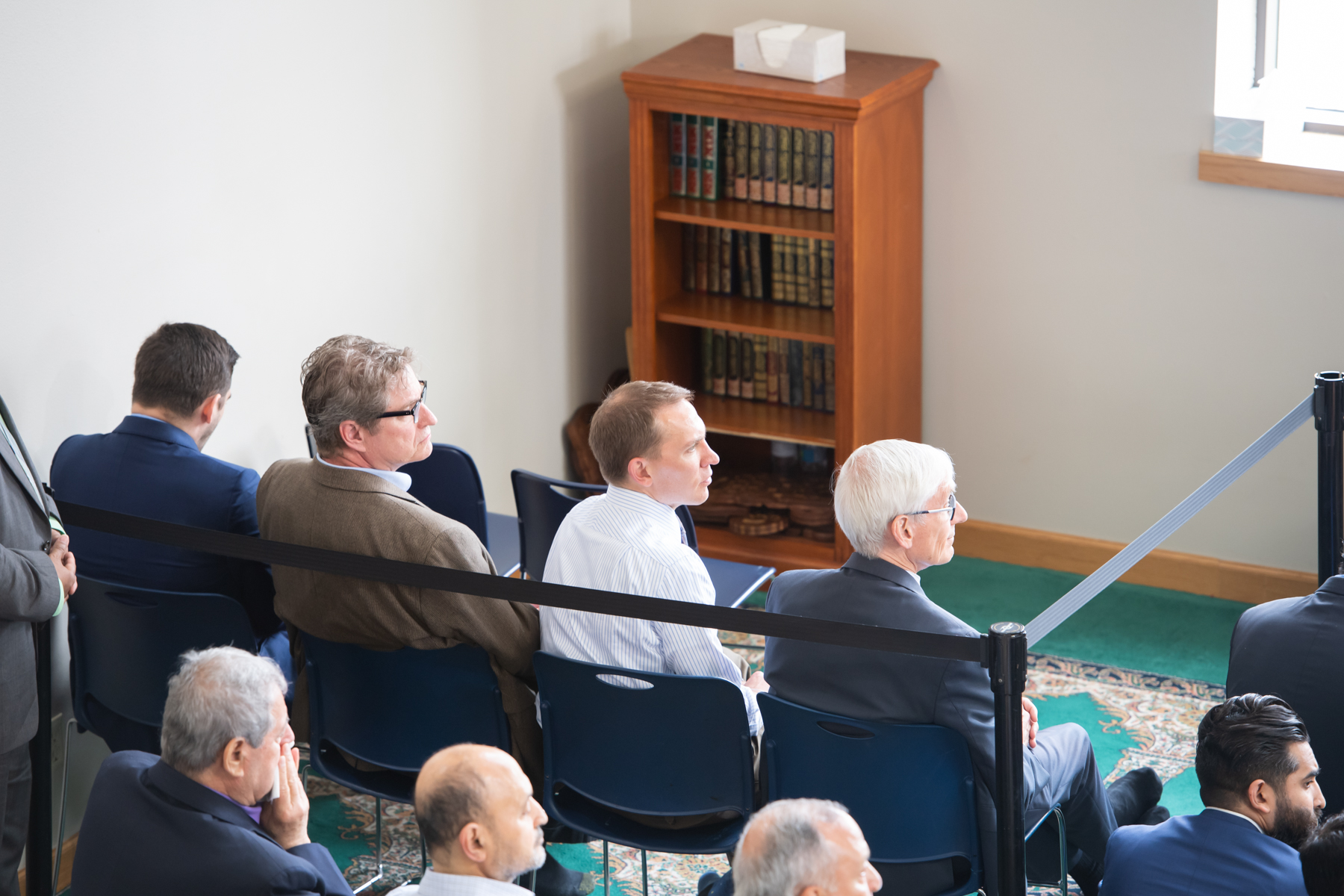 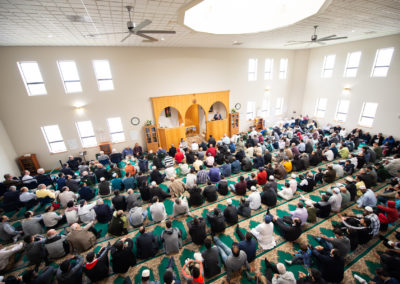 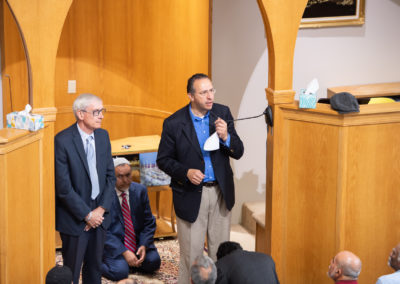 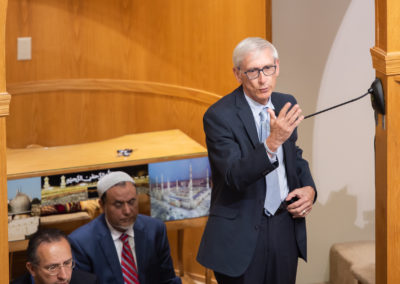 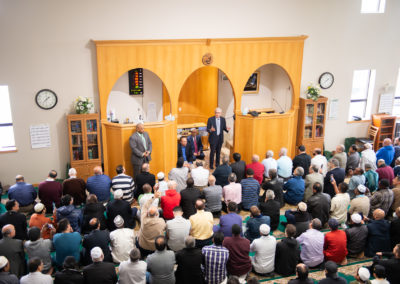 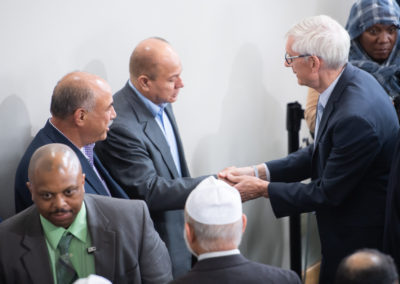 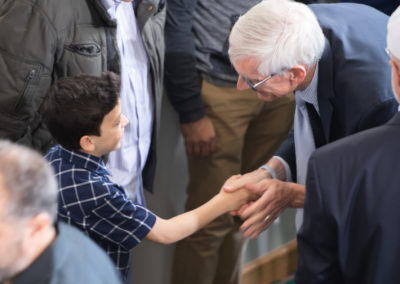 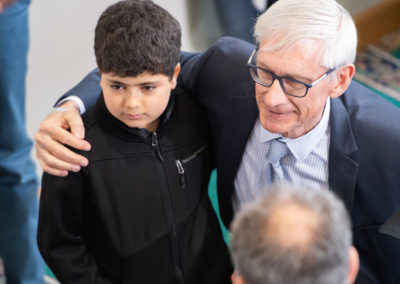 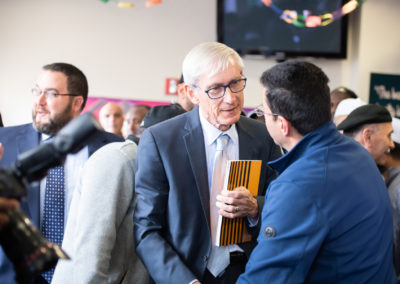 Acknowledging that Ramadan is a period of reflection, the governor said, “I reflect on this every single day: As a state, we reject Islamophobia, we reject anti-immigrant biases, and we reject bigotry. I know sometimes that is hard to believe, but those are part of Wisconsin values. And frankly, those are things that, as governor, I will continue to advocate for.”

After the governor’s speech, he posed for pictures with members of the congregation. Dane County assistant district attorney Awais Khaleel, who was instrumental in helping to arrange the governor’s visit, called it, “a big political hug. A lot of Muslim-Americans have felt really on the outside of American politics. We’re asked to raise money. Sometimes when people are running for office, they want to shake our hands, ask for our vote, but once they’re elected, we’re like kryptonite.”

Governor Evers visit to the mosque may have been the first such visit in almost a decade. Mr. Khaleel said he had “talked to people from Fond du Lac to Barron to Green Bay, and certainly in Madison where I live, no one can remember a sitting governor visiting a mosque. I understand Governor Walker visited while he was running for office . . . but once he was elected, people from several different mosques reached out. They were rebuffed repeatedly. [Walker] demonstrated through his actions that he wanted nothing to do with the Islamic community, which is pretty consistent with members of his party overall, unfortunately. They’d be welcomed here like everybody else.”

Awais Khaleel and Senator Larson have been friends since their undergraduate years, when both were members of the College Democrats of Wisconsin. Senator Larson has visited ISM about half a dozen times since being elected. After the event, when I was able to reach him by phone, Senator Larson commented that the governor’s visit “made it clear that all neighbors are important and accepted and appreciated.” He added that the governor’s talk “sent a powerful message: at least one party is not going to stand for the fear-mongering.”

Because the governor’s visit occurred at the time of the regular Friday prayer service at ISM, “easily 1500” people heard Governor Evers’ speech, said Mr. Atta. Those who were not in the prayer hall listened from overflow spaces, the mosque’s multi-purpose room and gym.

“The community was so excited,” said Kristin Hansen, special projects manager at Milwaukee Muslim Women’s Coalition. “It meant a lot to people that [Governor Evers] was there during Ramadan.” 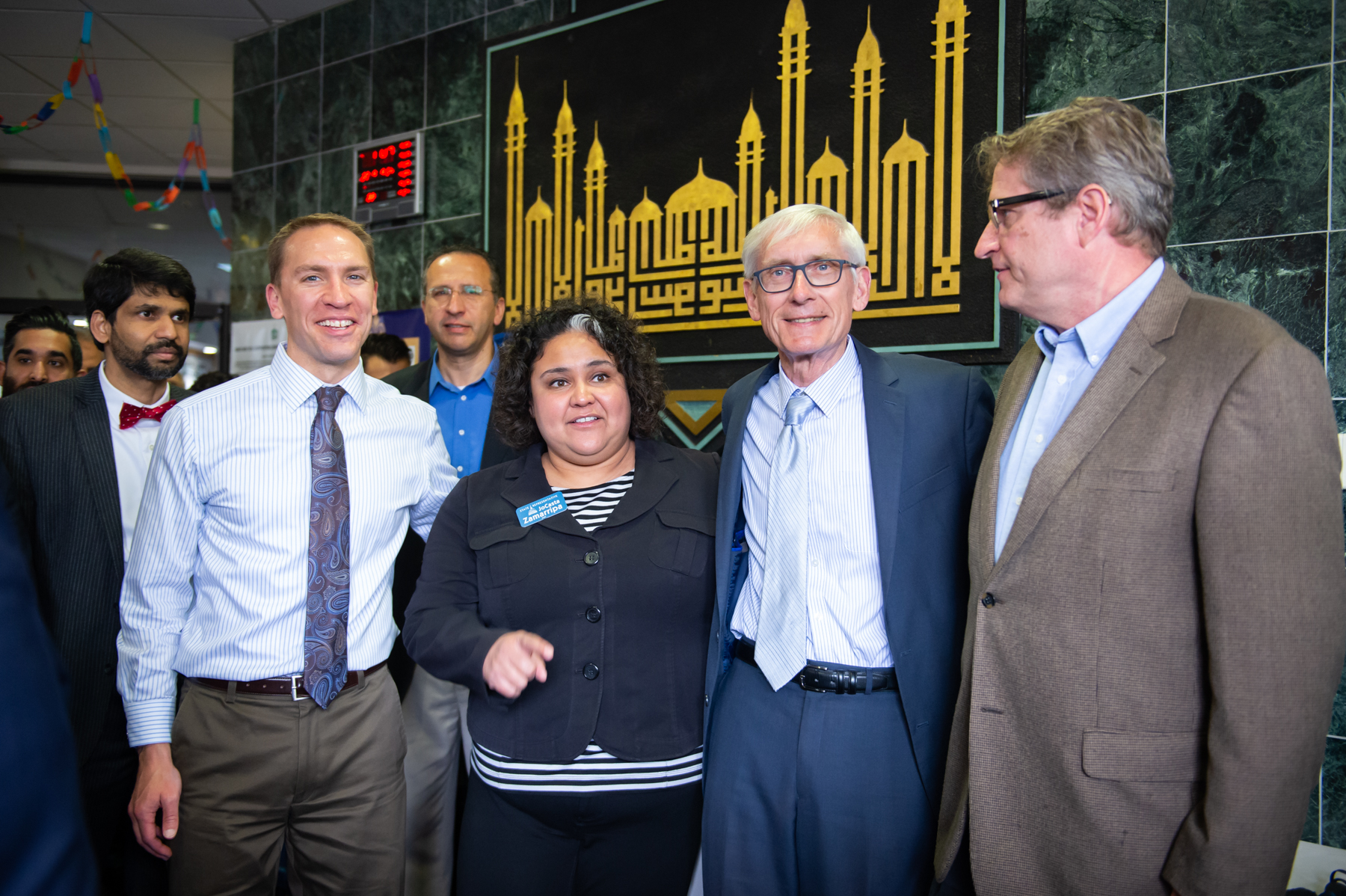 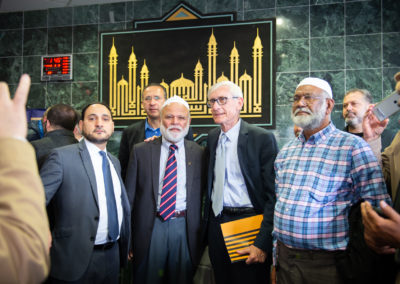 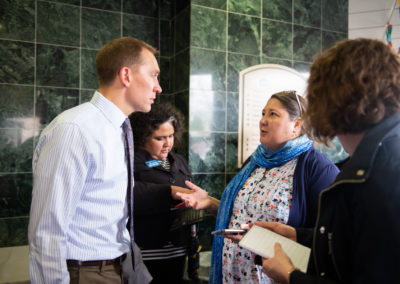 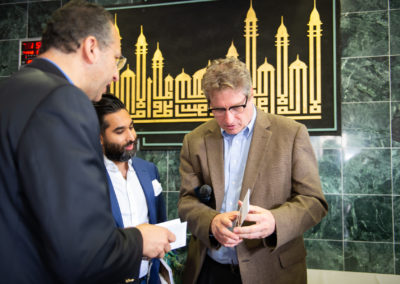 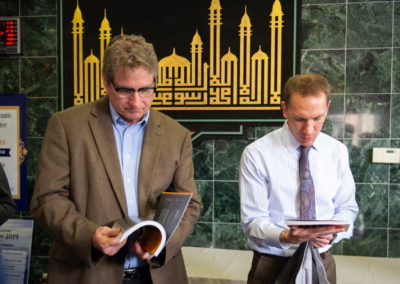 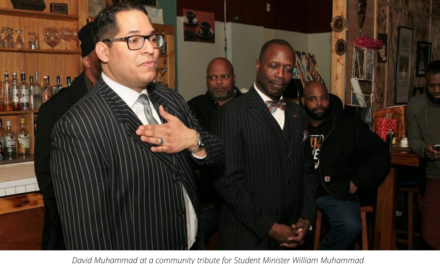 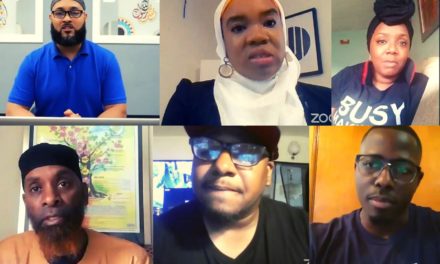 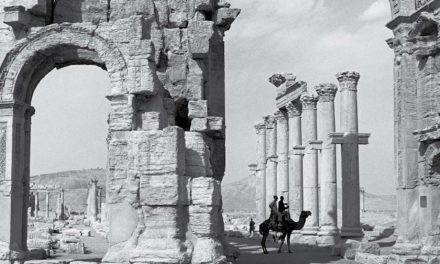